In quest to win, Self trusts his gut, not outside factors, in substitution decisions 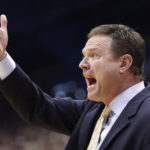 Kansas head coach Bill Self calls a play during the second half on Saturday, Jan. 15, 2011 at Allen Fieldhouse.

A college basketball coach doesn’t win 69 consecutive games on his home court by letting any pressure but one determine who plays when and who sits and watches.

A coach doesn’t win 69 home games in a row if he lets high school rankings, peeved parents, big-bucks boosters, strident message-board voices, AAU coaches or the potential to damage feelings influence his decisions. A coach doesn’t win close games on the way to a 69-game streak if he distributes minutes based on the need to develop players or bring them closer to reaching their potential in hopes that it all falls into place when the nation is gripped by March Madness.

A coach doesn’t win at least a share of the Big 12 Conference title in six consecutive seasons by distributing minutes based on the need to send messages.

Kansas University basketball coach Bill Self has an .833 winning percentage in Big 12 games as coach of the Jayhawks because he has made his decisions based on what will give his team the best chance of winning that day’s game. He has come out on top 95 times, while explaining a loss 19 times. The home-court winning streak, by far the nation’s longest, has felt more like 69 one-game streaks than one 69-game stretch. Self places that much urgency on any one game and he’ll follow his feel, and his alone, in terms of how to win that day’s game.

The second half of Saturday’s thrilling 63-60 victory against a confident Nebraska team illustrated as well as any game during the streak that the only pressure Self ever feels during 40 minutes of any conference game is the pressure to win, and it’s Self-imposed pressure.

Three minutes into the second half, Kansas had not attempted a shot and trailed, 35-25. Here’s how each possession ended to that point of the half: 1. Turnover Tyshawn Taylor. 2. Turnover Josh Selby. 3. Turnover Selby. 4. Turnover Elijah Johnson. 5. Turnover Johnson.

Ideally, Self would like to play three perimeter players, all of whom have point-guard skills. Self won this one by going for a long stretch with two shooting guards, Brady Morningstar and Tyrel Reed, and three post players, choosing from among Marcus and Markieff Morris, Thomas Robinson and Mario Little. The twins and Robinson scored 28 of their combined 32 points in the game’s final 16:06, when Marcus and Robinson asserted themselves in a big way.

Reed’s second three-pointer of the half forced Nebraska to stretch its defense and opened things up for the big men. But as much as that, the two senior guards, both native Kansans and not national recruits, made simple plays without turning it over, were able to get the ball to the post players and made winning plays from broken plays. KU didn’t turn it over in the final 16 minutes.

In consecutive Allen Fieldhouse win No. 69, Reed (16 points) and Morningstar combined for six assists and no turnovers. Taylor, Selby and Johnson combined for three assists and 10 turnovers. In a future game, probably not the too-distant future, those three will carry Kansas to victory while Morningstar and Reed watch. That’s the way it goes on a deep team with a coach who has the guts to ride hot hands at the playing-time expense of bigger names.

Asked if he had been trying to make a point when he left Selby on the bench the final 16 minutes, Self was a little surprised at the question.

“I’m trying to win the game,” he said. “There was no coaching point or anything like that going on. I’m just trying to win the game. That’s what coaches do this time of year. The teaching and that kind of stuff, you do it all along, but certainly, that’s a lot easier to do nonconference than it is conference.”

Self went with the players he trusted to make winning plays.

“Bottom line is you’ve got to win the game and you have to make sure when things aren’t going well, you put your team in a position where you can still win by doing things,” Self said.

Morningstar didn’t score a point and misfired on three of his three-point shots, but made a trio of standout plays. He jumped to save a ball from going out of bounds in the corner and delivered an on-the-money pass before landing. He soared to block a shot into the stands. He saved another ball from going out of bounds near midcourt and with his back to him, fired a pass to Markieff Morris near the baseline. Markieff rifled a diagonal pass to Reed, who stepped into it to bury a three-pointer and ignite the crowd with 12:58 left.

“The crowd was about as loud as it’s been since I’ve been here when he hit that shot,” Morningstar said.

KU’s next nine field goals came from considerably closer: four on dunks, the other five on drives to the hoop. Morningstar played the facilitator.

“I’m probably shooting the ball as bad as a human can shoot the ball right now,” said Morningstar, shooting .242 from long range this season, compared to .415 for his career coming into his senior year. “But in order to get out of the slump, I’m going to keep shooting and shooting. When I’m not making shots, I’m trying to find other ways to help us win.”