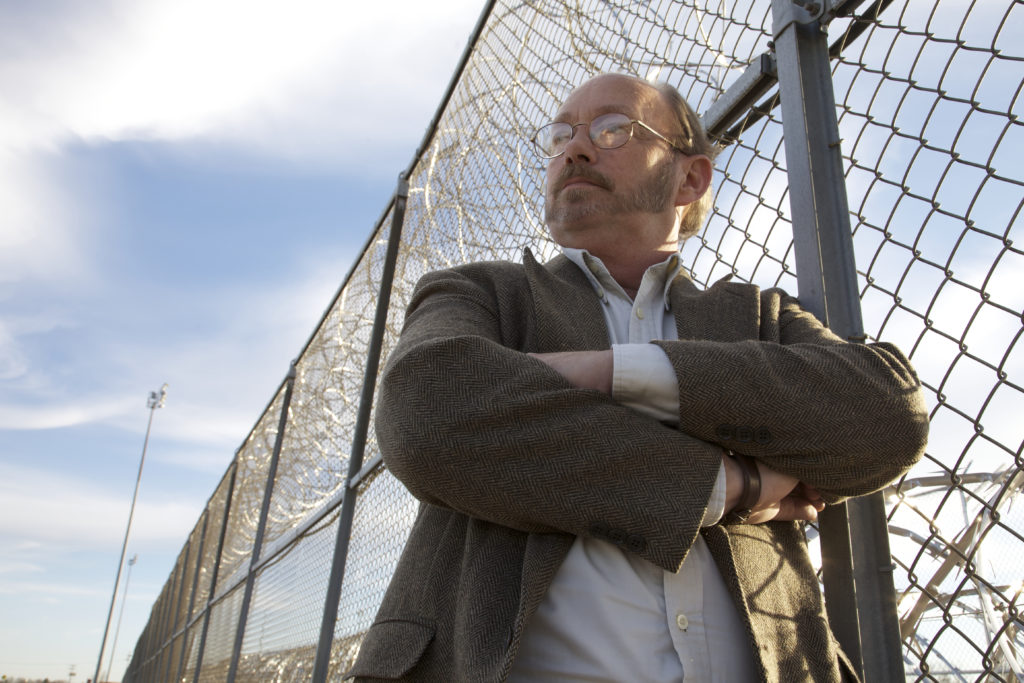 Roger Bonner is senior investigator with the Kansas Department of Corrections. When he joined the department in 1983, he inherited the case of Priscilla Ann Frey, who escaped from the Lansing Correctional Facility 35 years ago on Christmas Eve. Bonner says the department continues to follow leads today.

Authorities haven’t seen her since.

Frey remains the longest running of six at-large Kansas prison escapees in a case that continues to baffle investigators. But Frey’s ability to elude capture remains the exception, not the rule, for inmates who escape from a Kansas prison.

Inmate escapes happen regularly in Kansas, but it’s often not the stuff of folklore. While there have been 84 prison escapes in the past five years, the majority are minimum security inmates who escape during work release programs, said Department of Corrections spokesman Bill Miskell.

In 2006, inmate Jon Manard escaped from Lansing by hiding in a dog crate in a vehicle driven by Toby Young, a prison volunteer with the Safe Harbor Prison Dog Program. Young had fallen in love with Manard and agreed to assist him in the escape. The two were captured two weeks later in a small Tennessee town.

Two years ago, Jesse Bell and Steven Ford escaped from the El Dorado Correctional Facility. A former prison guard, Amber Goff, threw bolt cutters into the prison’s exercise area. Bell and Ford cut the fence and escaped with Goff. The three were arrested in New Mexico less than a week after the escape.

The key in both those high-profile escapes, said Miskell, is the help the escapees had from the outside.

“In many cases it takes the assistance of staff or it takes staff not doing the job they’ve been trained to do,” he said. “It’s virtually impossible to escape from any of our high-security facilities.” 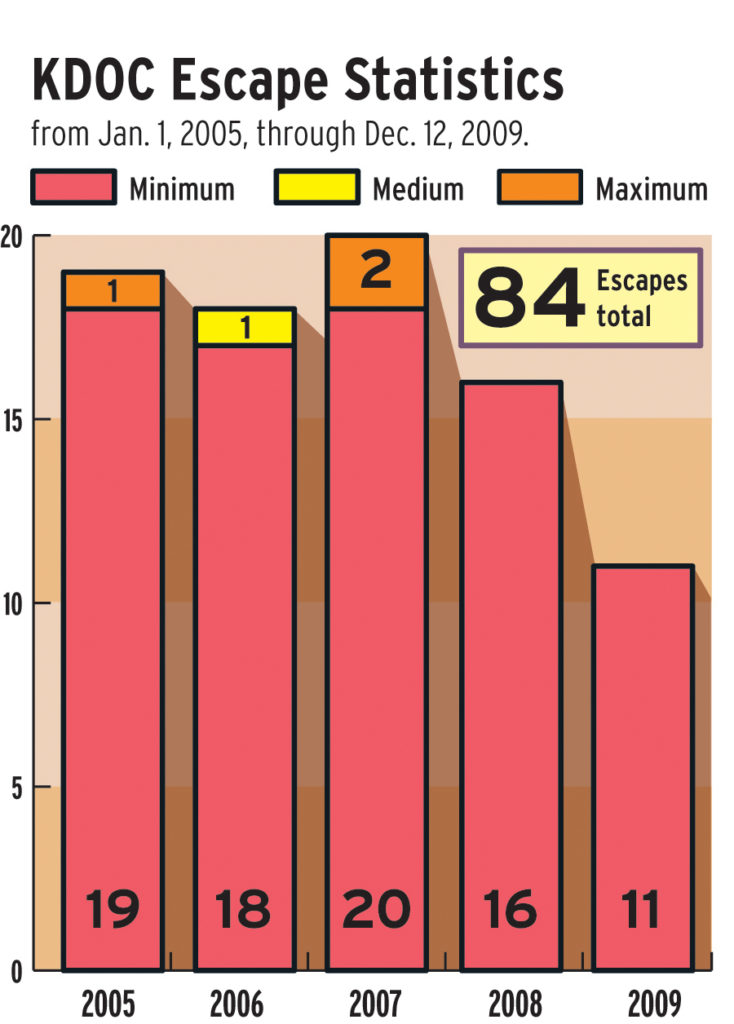 For the more common minimum security escapes, where inmates escape from work release, they don’t need much help, said Roger Bonner, a Department of Corrections senior investigator. Bonner is one of 13 investigators who track prison escapees.

“They simply walk away,” he said.

But they don’t last long on the run.

“Two to three days at the most,” said Bonner, adding that many of the escapees don’t have a plan once they leave.

“There’s no money,” he said. “They can’t work. People get tired of getting freeloaded. Someone will turn them in.”

Of the 84 inmates who have escaped since 2005, all but three have been captured. Still on the loose are inmates Scott Dwyer and Wayne “Lazy” Purdy, who were minimum security inmates at the Winfield Correctional Facility. The two walked away at the same time from a work release program on Nov. 26.

The other is Jose Ibanez, who walked away from a work release program at the El Dorado Correctional Facility on March 29, 2007. Bonner said he believes Ibanez, who was serving time on a drug offense, fled to his native country of Mexico following his escape. Bonner said investigators are still pursuing leads on Dwyer and Purdy.

Roger Bonner may have one of the most interesting jobs. He tracks prison escapees across the country.

A list of current Kansas escapees can be found here.

Frey’s story of escape began in Hutchinson on Feb. 27, 1973. According to court records, that’s the day when Frey forged a check at the Family Outlet Shoes store in Hutchinson.

Frey failed to appear in Reno County District Court after her release on bail. Frey was later arrested in Maryland on a forgery charge, and extradited to Reno County.

In July 1974, Frey pleaded guilty to charges of forgery and failure to appear. Before sentencing, Frey’s lawyer asked the judge to impose probation, explaining that Frey wanted to return to her three children who lived in California. Frey was married at the time, but said in court that she was in the process of a divorce.

Reno County District Court Judge James Rexroad sentenced Frey to one to 10 years in prison for the forgery offense, and one to five years for the failure to appear conviction.

Frey was sent to Lansing Correctional Facility, where she was housed in a dormitory behind the main prison facilities. The dorms are still in use today, housing minimum security male inmates.

Frey would have been eligible for parole after about 18 months. Less than six months into her incarceration, Frey joined two other female inmates and climbed the 8-foot fence around the dorms. They were free. It was Christmas Eve.

As happens with all escapes at Lansing, a loud steam whistle blew, alerting the town of a prison break.

Decades on the run

Frey is one of only two Kansas inmates who have been on the run for decades.

The other is Randy Schmidt, who escaped with another inmate while working on the property at the state fairgrounds in Hutchinson on July 18, 1980. Schmidt, serving a sentence for rape and sodomy, drove a state dump truck off the property. Schmidt’s escape partner was later arrested in Oklahoma, where he told investigators he split up with Schmidt.

Schmidt was arrested in New Mexico three months after his escape, but Kansas authorities didn’t find out about the arrest until it was too late.

“By the time they got his fingerprints ran, that case had been dismissed and he’d been released,” Bonner said.

That break has allowed Schmidt to be on the loose for nearly 30 years.

After Schmidt’s arrest in New Mexico, the trail went cold. But Bonner said they know he hasn’t been arrested since.

“Schmidt had a lot of connections with a lot of people,” Bonner said. “He could be living well in Mexico.”

What happened to Frey?

There have also been few clues to what happened to Frey following her escape.

“We know they split up,” said Bonner of the escapee trio. One of the women was arrested a month later in Wichita, while the other lasted slightly more than a year on the run, but was eventually caught in Louisiana in 1976.

What investigators do know is that Frey has never been arrested anywhere in the United States following her escape, as Kansas authorities would have been notified through national fingerprint databases.

That Frey avoided arrest for so long surprises Bonner.

Frey ran with a biker crowd and was a former topless dancer, not known to keep a low profile, Bonner said.

“She was out there,” he said. “Looking back at her history and the type of person she was, (it’s surprising) that she wasn’t picked up for something along the way.”

Another possibility is that Frey has died.

Though Frey and Schmidt have been on the run for decades, Bonner said he has hope they’ll someday be returned to a Kansas prison. Authorities have received recent tips on the whereabouts of both Schmidt and Frey, and as long as the leads keep coming in, Bonner said they’ll keep looking.

Frey, 59, and Schmidt, 58, if still alive, would be settling into middle age now.

Bonner admits that the passing years certainly diminish the chances of solving the mysteries.