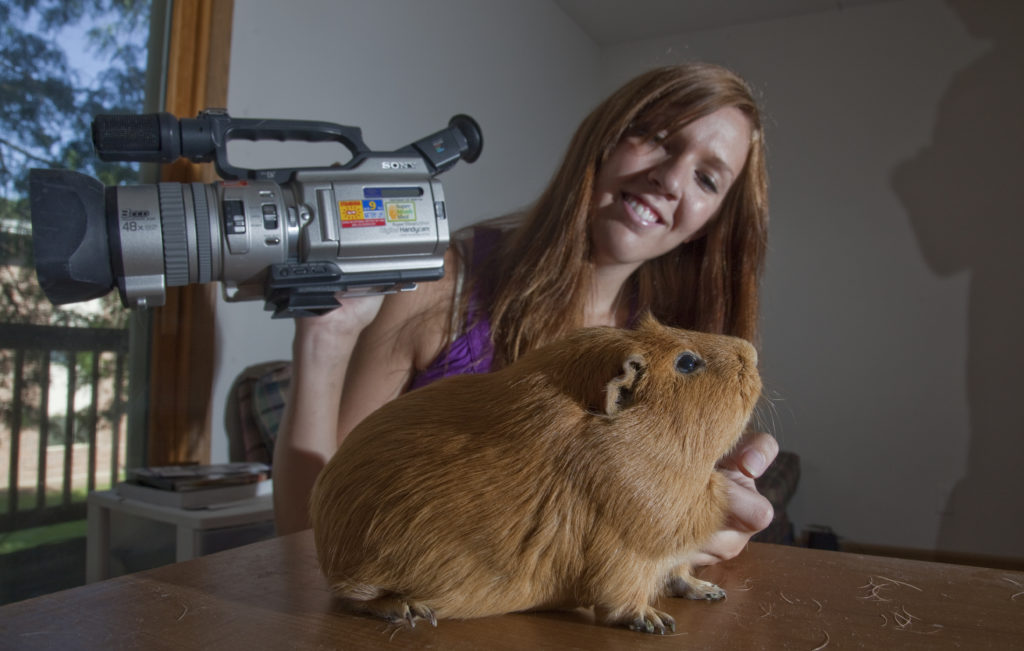 Alyssa Buecker, a Kansas University student made famous in 1999 when, as a Lawrence home school student, she was commissioned by HBO to make a movie about guinea pigs. She's pictured with Otto, a pet guinea pig. 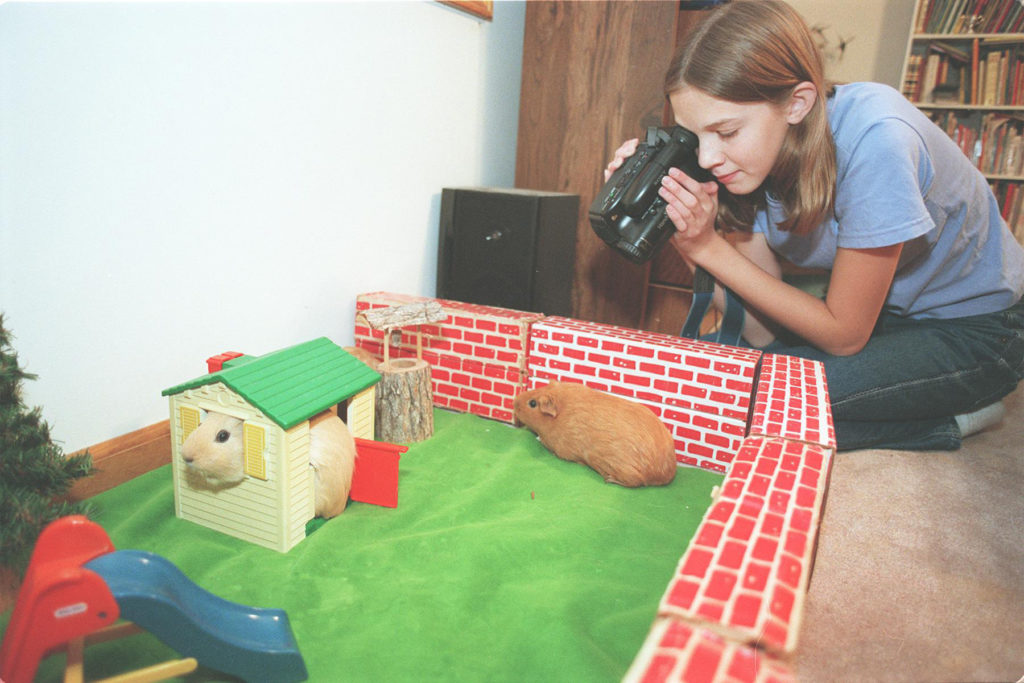 Alyssa Buecker, shown Jan. 7, 1999, in her Lawrence home, films her guinea pigs. Here, Little Angel, left, and Dolly are in a backyard setting.

Actor Bill Nighy — with that English accent made for Shakespeare — sounds eloquent promoting his new film, the Disney blockbuster “G-Force,” which features guinea pigs who save the world.

“There are very few really good scripts and they come in all shapes and sizes,” Nighy says innocently enough to the Associated Press. “And this is in the form of the very first guinea pig movie the world has ever known, which makes me a pioneer.”

Oh, great guinea pigs, did he just say that?

“I made the first guinea pig movie,” Buecker says.

Yeah, you remember Buecker. As a 14-year old Lawrence home school student she received gobs of national attention for making Carrot Wars — a 17-minute film that used nothing but guinea pig “actors” to spoof the Star Wars series. The film was commissioned by HBO, was shown multiple times on the cable giant, and hit the big screen — in a somewhat limited release — a full nine years before “G-Force” was released last month.

When confronted with that fact, a Disney spokeswoman, who declined to give her name for publication, immediately did her best to distance Disney from this ticking time bomb. She quickly pointed out that it was not Disney that made such a statement. That was all Nighy.

Yes, Mr. Nighy, that is a Disney bus you are under.

“It appears that Mr. Nighy wasn’t aware of this project,” the spokeswoman said.

Really? This is a man who is not just an actor, but a thespian, a student of the craft. Are we supposed to believe he hadn’t heard of Carrot Wars?

Excuse me. What’s that?

“Maybe they could say they are the first fake guinea pig movie,” Buecker said.

By the way, Buecker’s press agent also is her mother.

Anyway, Buecker believes she will be able to move past this disappointment. She’s now a Kansas University student studying Japanese, and works part-time at the Lawrence Humane Society.

After owning as many as 23 guinea pigs when she was a teenager, Buecker learned something about the creatures: she’s allergic to them.

Yes, she said, perhaps that has cost her an Oscar or two.

So that brings up the question of whether this whole “G-Force” debacle has reopened a painful wound or brought back good memories? For the most part it has been fun to remember all the attention she once received, she said.

In addition to having her work broadcast on HBO, she also was featured in a People magazine article, and received recognition from Nickelodeon, Animal Planet and PBS. A little place called Walt Disney World also honored her in 2000 as a Disney Millennium Dreamer.

Carrot Wars has not quite grossed the $127 million that “G-Force” has taken in thus far, but Buecker does still sell a few of the 17-minute DVDs online.

For the most part the recognition is reward enough — though she wouldn’t turn down a trip to Disney World — she said.

And all this has got her thinking.

“It has made me think about maybe having a guinea pig casting call,” Buecker said.