Nuclear reaction: Cast, crew of ‘The Day After’ reunite for 25th anniversary of film shot in Lawrence, KC 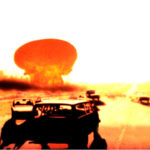 A scene from The

Twenty-five years ago, terrorism was a footnote, the economy was thriving, and America was overwhelmingly comfortable with its current president.

Still, a sense of fear and impending doom blanketed the nation due to the escalating nuclear arms race between the United States and the Soviet Union.

So when a TV movie aired Nov. 20, 1983, the program became one of the most watched and controversial events of the decade.

ABC’s “The Day After” – billed as a “starkly realistic drama of nuclear confrontation and its devastating effect on a group of average American citizens” – was viewed by half the adult population of the U.S. (nearly 100 million viewers), which was the largest audience for a made-for-TV movie up to that time.

It was all the more surprising considering the film was both situated and predominantly shot in Lawrence.

“We tend to think that with the ending of the Cold War, the nuclear danger has receded; if anything, it has grown worse, with atomic weapons no longer under control of stable governments,” says “The Day After” director Nicholas Meyer.

“I think it’s a good idea to be reminded that until all such weapons have been destroyed, we are hanging by a thread.”

Meyer will be among the cast and crew returning to Lawrence as part of a 25-year anniversary screening and reunion to take place at 7 p.m. Thursday at Liberty Hall, 644 Mass.

Also appearing will be “The Day After” producer Robert Papazian, actor Jeff East, local casting director Jack Wright and David Longhurst, who was mayor of Lawrence in 1983.

Oddly enough, the reunion was inspired by someone who has never been to Lawrence before. In fact, he’s never stepped foot in America.

“I’m interested in how ordinary people react to significant events, like wars, revolutions and so on,” says Kyle Harvey, a researcher at Macquarie University in Sydney, Australia, who specializes in politics and film of the 1980s.

“Something that kept cropping up in my research was this ever-present perception amongst the public that there was an imminent threat of nuclear war. So I decided to focus on how that played out in the public mind, and what people did about it. … An obvious case study was ‘The Day After,’ which is essentially what brings me to Lawrence.”

Earlier this year, Harvey started kicking around the idea of organizing an anniversary screening as part of his doctorate project.

“Being a historian, I’m not terribly interested in contemporary things,” he says. “But a lot of people do see the contemporary significance of the film. The theme of my project is to find out how this resonates in Lawrence.”

When principal photography for “The Day After” began Aug. 16, 1982, it became immediately clear to the residents of Lawrence they were going to experience a cinematic production unlike any the town had encountered before. A small army of cast, crew, vehicles and equipment set up camp, transforming sites such as downtown and the Kansas University campus into scorched, devastated blast zones populated by wounded survivors.

Among the principal cast was Jeff East, a Kansas City native who already had a dozen films to his credit. (He is probably best known for his early Disney roles as Huckleberry Finn and as the young Clark Kent in 1978’s “Superman.”)

“They were looking for people who were real. They didn’t want stars. They wanted good actors who really looked like they were Kansans,” East remembers.

The actor had moved to Los Angeles when he was 14 to pursue his career, so “The Day After” provided him the rare professional chance to return to his roots.

East describes his character in the film, Bruce, as a good-old Kansas boy on the eve of getting married who is rather carefree and unconcerned about the political unrest happening in front of his eyes.

“I was the typical guy who lives his life in denial. … He doesn’t take life all that seriously,” he says. “Then all this serious (expletive) hits the fan.”

The actor recalls developing a great working camaraderie with director Meyer and striking up a friendship with co-star Steve Guttenberg, who he took golfing at his parents’ country club in K.C.

But equally important to East’s working relationships was the sense that he was involved in something important.

“I wanted to be part of a statement that we need to stop the Cold War,” says East, who moved back to Kansas City in 2004 to help his family with a commercial real estate company.

“I was married to a lady whose father was the head of the Northrop Corporation – they were a big defense contractor. There was all these politics going on. My parents were big Republicans who were friends with the Doles. I was trying to be quiet and keep it under my hat, but I really was an anti-nuclear person.”

East says when the film finally aired, he was blown away by the scope and power of the project, which was nominated for 12 Emmy Awards and won two.

“The most memorable scene is the shot of Jason Robards when he goes out to look at the devastation in Kansas City,” East says. “That’s a pretty amazing piece of film. That struck a chord with me. It scared me a little bit.”

East also received some unlikely feedback from a particular viewer.

“I ended up getting a really nice letter from my father-in-law congratulating me being a part of history and stepping in to possibly help end the Cold War,” he recalls.

“The Day After” didn’t have quite that same sense of cultural gravitas in Australia, according to Harvey.

“It was shown on TV in 1984. But it wasn’t the huge controversy that it was in the States. A lot of people I talked to here (in Australia) haven’t heard about it,” says the 25-year-old Harvey, who only saw the film for the first time a few years ago.

However, Harvey says the nuclear issue was a hot-button cause on his continent. This took the form of a movement against Australian uranium mining, with the perception being that these mines were contributing to the arms buildup among the superpowers.

Back in the U.S., the airing of “The Day After” generated significant political fallout.

“‘The Day After’ changed Ronald Reagan’s mind about the feasibility of a winnable nuclear war,” Meyer says.

“Both in his memoir, also in ‘Dutch,’ Edmund Morris’ Reagan biography, and in my personal conversations with Morris, who hung around the Reagan White House for years while gathering material for the book, I learned how rocked Reagan was by the film and how, as a result, he went to Reykjavik (in 1986) and signed the intermediate range weapons treaty with (Mikhail) Gorbachev – to the consternation of fellow conservatives.”

Meyer, a former Oscar nominee for screenwriting, still considers the making of the film as the most worthwhile experience in which he was ever involved.

Residents of Lawrence will be offered the opportunity to speak about their experiences with making the film or reactions to watching it. Harvey will be conducting interviews in the upper lobby of the Eldridge Hotel, 701 Mass., between Nov. 21 through 24. Participants are encouraged to contact him at 841-0314 or kyle.harvey@mq.edu.au.

Harvey mentions he recently taught a class at Macquarie titled “The World Since 1945.”