Discovery of unstable rock delays expansion of Highway 59 one year

Expansion of U.S. Highway 59 in Douglas County will be delayed one year, to 2011, after unstable shale rock was found near Pleasant Grove Hill.

“When you’re putting $100 million in a project, you want to make sure you know exactly what you are building on,” said Joe Blubaugh, a spokesman for the Kansas Department of Transportation.

Early geological studies detected the rock south of Lawrence on land that will be used to expand the two-lane highway to four lanes from Lawrence to Ottawa. The shale rock can absorb moisture and expand when it becomes exposed, which could damage the finished roadway, Blubaugh said. 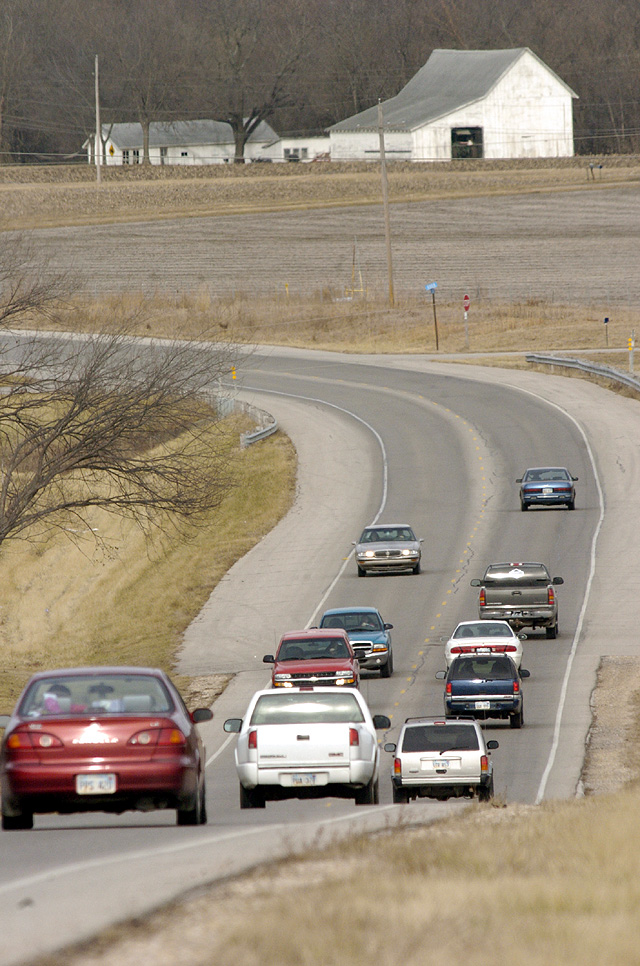 According to the new schedule, the Franklin County portion of the new highway will open in late 2009, and a temporary connection will link it to the highway in Douglas County while construction continues.

When construction begins, workers will grade the area near Pleasant Grove Hill first. Before paving that section, the shale must sit exposed for one year, which will cause it to break down, Blubaugh said. During that time, the other portions of the Douglas County project can continue.

“We wouldn’t want a delay like this in every project,” Blubaugh said. “It’s really good that we did the in-depth geological study.”

Leo Beier has lived near Highway 59 and Pleasant Grove Hill since 1987, but he said he knew nothing about an abundance of shale rock on his property.

While Beier said he believed something needed to be done with the highway, he thought the safety problem could be solved with shoulder work and speed-limit enforcement on the existing highway.

Beier is also not crazy about moving or living in a house next to a freeway, and he says he’s waiting to hear from the state on how the new highway will affect his property.

Douglas County officials who support expanding the highway said they weren’t discouraged by the delay.

Road to be closed

The Kansas Department of Transportation has announced that U.S. Highway 59 will be closed from about 9 a.m. to 10 a.m. Monday between Stafford Road and North 100 Road so that homes can be moved. The Kansas Highway Patrol will redirect traffic. The detour will be from North 100 Road to Montana Road to Stafford Road.

“I’m just pleased that they gave us an update. You don’t like the idea that it’s going to be longer to finish it, but you like the idea of knowing,” County Commissioner Bob Johnson said.

“These things happen,” County Commission Chairman Charles Jones said. “They will make good progress, and we’ll do what we can to help them.”

KDOT sent letters to property owners this week, informing them of the new schedule. The mailing also addressed KDOT Secretary Deb Miller’s plan to ask legislators this session to advance the sale of $150 million in bonds authorized in 2004; allow the issuance of an additional $60 million in bonds; and honor a commitment to repay in the next several years $126 million taken from the KDOT budget in 2002 for the state’s general budget.

Blubaugh said KDOT wanted property owners to know it was committed to its projects around the state.

“I don’t think there’s any question about their commitment,” Johnson said. “In fact, it’s rather encouraging that we’re going to study this, and we’re going to do it right.”