Funding for road work in jeopardy

Bonds could be needed to erase gap

Topeka ? Kansas Transportation Secretary Deb Miller on Tuesday urged lawmakers to get the state highway plan out of the ditch.

At stake are more than 135 road projects worth $1.2 billion, including several in the area, such as the $165 million widening of U.S. Highway 59 in Douglas and Franklin counties, she said.

The problem is that a funding gap has grown in the 10-year, $13.5 billion Comprehensive Transportation Plan that was adopted in 1999, Miller said.

That gap was caused by lower-than-anticipated federal highway funding for the plan, along with some increased expenses, she said.

“The federal funding gap, combined with escalating construction and operating costs driven up by this season’s devastating Gulf hurricanes, have put our transportation plan in jeopardy,” Miller said. 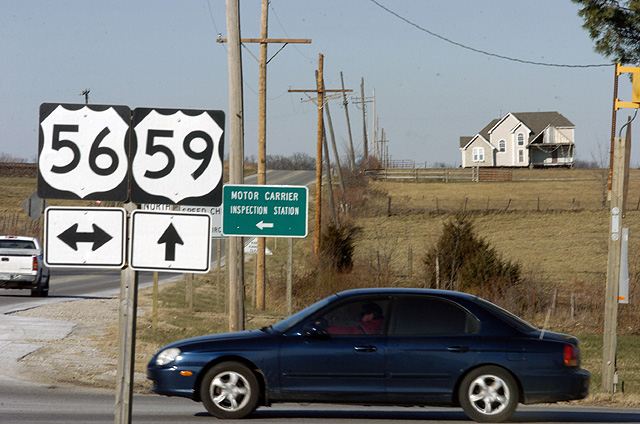 A motorist stops at the intersection of U.S. Highways 59 and 56 just west of Baldwin Tuesday afternoon. The home in the background sits on beams ready to move to a new location because of planned road construction.

To bridge the gap, Miller said that early next year she will ask the Kansas Legislature to advance the sale of $150 million in bonds that were authorized back in 2004.

The Kansas Department of Transportation will also request that the Legislature allow the issuance of an additional $60 million in bonds to provide a safety net for the transportation program.

Miller also plans to ask the Legislature to honor the commitment to repay, over the next several years, $126 million transferred from the KDOT budget in 2002 to take care of general state expenses.

Miller says she is confident the bond money will be available to KDOT, but if it isn’t the department will have to go through the list of pending projects and decide what stays and what gets cut.

“We absolutely cannot get into a negative position. We have to be able to follow through and pay contractors on work that’s already been let, so we have to manage our money very prudently and if we don’t get all of these dollars it’s going to change what we’re able to do,” Miller said.

Of the 138 pending projects in the transportation plan, five are in Douglas County: two major modification projects, one bridge, one economic development project and one other highway improvement.

Douglas County Commissioner Bob Johnson stressed the importance of the project for safety reasons, but also expressed confidence the funds would come through.

“My sense is that she (Miller) is talking to the public, but she’s also trying to get the message to the Legislature,” Johnson said.

“The Legislature put KDOT in a very difficult position and that’s not fair. The Legislature took the money and I can’t imagine that they wouldn’t authorize the bonds to replace the funding,” he said.

Of the U.S. 59 project, Sen. Roger Pine, R-Lawrence, said, “I would be concerned about losing that. “There has been a lot of effort going into it and there are statistics showing that is a particularly dangerous stretch of road.”

Reps. Barbara Ballard and Paul Davis, both Democrats from Lawrence, noted that part of KDOT’s funding problem is the Legislature’s doing, since it borrowed money to help pay for other state budget items during lean years.

“We have to always remember that we borrowed from KDOT. If we hadn’t diverted that money to other places, they could have had it to push into the program,” Ballard said.

She said the state should fulfill its promises made in the transportation plan because the list of proposed projects helped get it approved by the Legislature.

Davis agreed. “Some of the projects, like Highway 59, are pretty important, and I would like to see them completed as scheduled,” he said.