Road to nowhere may be going places

Efforts to complete the controversial South Lawrence Trafficway have been given a $1.5 million boost by federal lawmakers.

U.S. Sen. Pat Roberts, R-Kan., announced Friday that he has successfully included $1.5 million worth of funding in a federal transportation bill to jump-start work on the eastern portion of the trafficway, which has been stalled by concerns that the proposed route through the Baker Wetlands would be environmentally damaging and would harm nearby Haskell Indian Nations University.

“Construction of the South Lawrence Trafficway is long overdue,” Roberts said. “We have been debating this project for over 20 years, and I call on my colleagues at the Kansas Department of Transportation, the city of Lawrence and Douglas County to use this federal investment to get this project moving.”

Roberts specifically said the money should be used to complete the 32nd Street alignment of the road, which has been approved by the U.S. Army Corps of Engineers. The 32nd Street route would run the road through the Baker Wetlands.

Trafficway supporters acknowledged that the $1.5 million is far from the estimated $110 million needed to complete the bypass, which would connect Interstate 70 west of Lawrence with Kansas Highway 10 east of Lawrence. But supporters said the funding could be effective in priming the pump for future funding and convincing state officials the project is feasible. 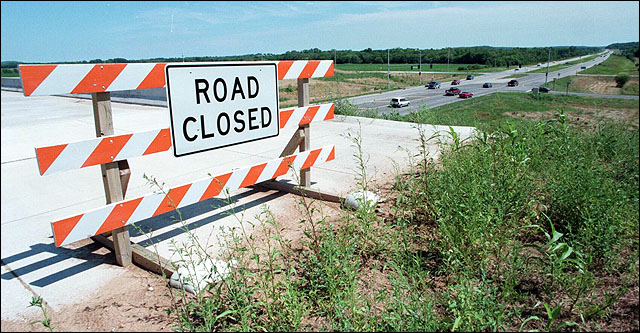 Opponents, though, have not yet filed any such lawsuit. And Johnson said they likely would not because they know that the threat of a lawsuit is enough to stop the state from moving ahead on the project.

“It has been a classic standoff,” Johnson said.

But now Johnson said the $1.5 million provided just enough money for the state to begin work that would force opponents to file a lawsuit. Johnson said a lawsuit would be beneficial to the project because it would allow the legal arguments to be solved once and for all.

Bob Eye, a Topeka lawyer and Lawrence resident who has represented trafficway opponents, said he was prepared to fight efforts to construct the trafficway. He said the new federal money should be used to explore alternatives to running the road through the wetlands.

“It is just good money after bad,” Eye said. “They’re the ones that control the bulldozers, so we’ll see what happens. But I think their zeal to pave the wetlands is misguided and ultimately contrary to the community’s best interests.”

Steve Swartz, a spokesman with the Kansas Department of Transportation, said the department was surprised to learn of the funding and had not included any money in its comprehensive transportation plan to complete the estimated $110 million bypass project to connect Interstate 70 west of Lawrence with Kansas Highway 10 east of Lawrence.

A spokeswoman for Roberts said the senator decided to lobby for the funding after being asked by many Lawrence citizens over the years, including Johnson, Lawrence Chamber of Commerce president Lavern Squier and Lawrence businessman Bennett Griffin.

Roberts said the trafficway was a critical piece of the efforts to build a life sciences corridor between Manhattan’s Kansas State University and the Kansas City area.

“The city of Lawrence, with all its wonderful resources, is the crossroads of this life sciences effort,” Roberts said. 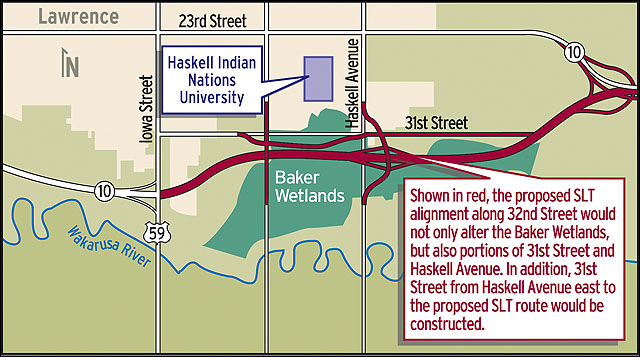 Roberts said the SLT project should include a previously negotiated agreement between KDOT and Baker University, the owner of the wetlands, that would pay the university approximately $8.5 million to create and maintain 300 acres of new wetlands in the area to replace the approximately 65 to 100 acres that would be disturbed by the road project.

In the same transportation bill, U.S. Rep. Dennis Moore, a Democrat who represents east Lawrence, announced he successfully added $800,000 to serve as seed money to extend 31st Street east of Haskell Avenue to connect to Kansas Highway 10 near Noria Road.

A 2001 study by the city and the county concluded that 31st Street likely would need to be expanded and extended by 2012 to meet future traffic needs. A cost estimate for the extension was developed, but it would be far more than $800,000. The report estimated it would cost $4.85 million to repave and improve the intersections on the existing 31st Street.

“I just think this is a big need for our community,” Amyx said. “If designed properly, it can act as a very good east-west roadway system that can move traffic and not have a negative effect on the neighborhoods or Haskell Indian Nations University.”

Eye said whether his group would oppose the 31st Street project would depend on whether the wetlands would be disturbed.