If you thought vaping was safe, KU researchers have bad news 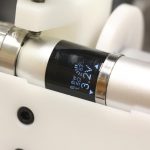 A robot at KU's School of Medicine takes the vapor from e-cigarettes to test it on human cells from lung donors.

KANSAS CITY, Kan. — Many people figure vaping spares their health because it lets them inhale nicotine in aerosols instead of sucking in smoke from burning cigarettes.

New research from the University of Kansas casts doubt on that, raising the specter that vaping nicotine may cause some of the same respiratory problems that plague and even kill smokers today.

“Vaping is just considered not harmful, even though there are no data to support that statement,” researcher Matthias Salathe said. “There are more and more data to actually oppose that statement.”

Salathe chairs the Department of Internal Medicine at KU’s School of Medicine, where his lab uses a robot that vapes to test the effects on human cells obtained from deceased lung donors.

The team’s latest research, published last month by the American Journal of Respiratory and Critical Care Medicine, found that vaping nicotine damaged the natural ability of those cells to clear out mucus.

That dysfunction leads to chronic bronchitis — and the coughing, shortness of breath and fatigue that come with it. Scientists such as Salathe worry that means the vaping trend sweeping the U.S. could eventually translate into more people developing chronic obstructive pulmonary disease.

Commonly caused by smoking, COPD is already a leading cause of death in the United States.

The KU researchers found that the aerosols from nicotine e-cigarettes hurt mucus-clearing abilities in sheep, too. Sheep were used because of similarities between their respiratory system and that of humans.

Yet the KU research remains at the pre-clinical phase, meaning scientists have more work ahead to answer the question with greater certainty.

Taken in context with other research, though, Salathe sees reason for worry. His lab’s results add to a mounting body of evidence that vaping causes such problems, including evidence from studies on living people who vape.

Getting more definitive answers, though, takes time. Rigorous scientific research can’t move as fast as the vaping craze that now has millions of U.S. teenagers inhaling nicotine. And diseases like COPD play out over years.

According to the Lawrence-Douglas County Health Department, nearly 1 in 5 high school students in Kansas regularly use some type of tobacco product including cigarettes, e-cigarettes, vaping and chewing tobacco, and 1 in 3 have tried an e-cigarette.

The Douglas County Commission approved in September 2018 raising the age to purchase tobacco products in the county’s unincorporated areas to 21.

The Lawrence City Commission has discussed a similar Tobacco 21 initiative, but held off on passing it, pending a ruling from the Kansas Supreme Court on a similar law in Topeka.

“To really know, we need to wait 10 to 20 years, right? To see whether these humans are actually developing the diseases that we predict,” Salathe said. “The question is, now from a policy point of view, is that an acceptable experiment to actually do in the population?”

More than 20 cities and counties across Kansas have banned the sale of tobacco-related products to people under the age of 21 in hopes of preventing them from becoming hooked.

That’s based on studies that show most people who become addicted long-term begin using nicotine in their teens.

Last month the Kansas Supreme Court upheld local bans on sales to people under 21 in a case brought by vape and tobacco shops against the city of Topeka.