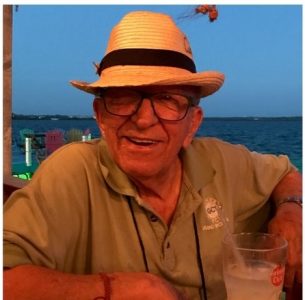 World traveler, Dr. David L. Hiebert, 84, departed this earth Monday, April 19, 2021 for his next journey during an evening surrounded by music and reminiscing with his family.

Dave was born in 1936 in Kansas City, KS. with a passion for learning. The son of Peter E. and LaVerne Margaret (Haskell) Hiebert, Dave received his BA from Ottawa University in 1957. He served our country in the United States Army during the Cuban Missile Crisis as a Captain of the 1st Armoured Division Medical Corp. After earning his medical degree from Kansas University and finishing his residency in Wichita, Dave and his then wife, Jan R. Snyder and their three daughters, Kimberly, Laura, and Megan moved to Lawrence. There, he began his practice as Douglas County's first radiologist, founding Radiological Professional Services in 1968. In Lawrence, Dave, known as ‘Doc’ to athletes at the University of Kansas, took on the role of Team Physician from 1967-1985.

Dave was proudly the first male member of the League of Women Voters in Lawrence, Chairman of the United Fund Drive, Chairman at the O'Connell Youth Ranch, President of Rotary of Lawrence, Breakfast Cosmopolitan, Achievement Place for Girls, and was a Friend of Bill W. He was active in the American Medical Society, Kansas Medical Society, American College of Radiology, Radiologic Society of North America and the Kansas Radiologic Society, the Advisory Committee for IIYM, Fundraising Committee for the New Lawrence Arts Center, and a docent at the Spencer Museum of Art.

In 1978, Dave married Gunda Freeman and gained a stepson, Tim. Together, Dave and Gunda received the Phoenix Award, the Governor's Arts Award, the Mildred Clodfelter Award and the Distinguished Achievement Award from the KU School of Fine Arts.

After his retirement in 2001, he read x-rays at every community hospital within a 150-mile radius. His passion for learning never ceased. He audited classes at KU, working his way through most of the course catalog. Dave basked in all of the ‘free’ education he received. A chance encounter with a KU piano student led Dave and Gunda to over 20 years of bringing musicians from across the world into their living room, hosting over 1,000 recitals. The Hieberts forged numerous close ties, leading them to visit students and families all over the world.

Dave rarely bought anything without a coupon. His adage was, ‘That's how we afford our philanthropy and travel’.

His true passion was traveling, the more obscure and distant the better. Visiting nearly 100 countries required Dave to get a haircut the same way he changed the oil in his Cadillac- every 3 months or 3,000 miles, whichever came first. He loved taking his family members on adventures, especially Cuba!

Dave was welcomed at his final destination by his parents, sister, Pris Spong (Richard), and a flurry of well-loved canines.

A celebration of life will be held at 2 p.m. on Sunday, May 23rd at the Lied Center Auditorium. All are welcome. As social distancing measures will be in place, please use the following email to RSVP for the celebration, and to leave any personal messages. DLHRSVP@gmail.com

While there's always more to say, Dave's admonition on his answering machine clearly states, ‘Never use 2 words when one will do.’ And, the newspaper doesn't accept coupons.