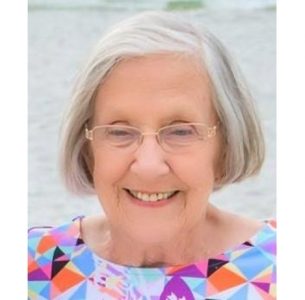 June was born on January 26, 1937 in Kansas City, Missouri the daughter of Joe J. and Helen (Thomas) Shenk.

June attended grade school in Merriam, KS. She graduated from Shawnee Mission High School in 1955. She attended Kansas State University where she was a member of Kappa Kappa Gamma sorority. She worked for TWA as a statistical illustrator to help her husband through dental school. When the family moved to Lawrence in 1963, June was a homemaker and later helped run her husband's dental business.

June was a folk artist who enjoyed taking and teaching painting classes at Jan's Tole Shop in Topeka, KS for many years. She loved spending time with her painting friends. Her hobby became a small side business as June and Larry worked together to create artwork, instructional books, and kits. She also enjoyed sewing, knitting, and reading on her Kindle. She was an excellent cook and holiday hostess, had a goofy sense of humor, and was a master at making a short story long. June will be dearly missed by her family and friends.

Memorial contributions may be made in her name to The Arthritis Foundation and may be sent in care of Warren-McElwain Mortuary, 120 W. 13th Street, Lawrence, KS 66044.

For more information or to post a condolence visit warrenmcelwain.com.