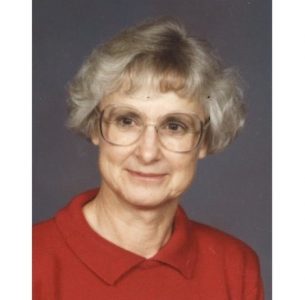 Joyce Elizabeth (Ellis) Friesen was born September 27, 1931, second youngest of a brother and 5 sisters, born to Elmer and Florence (Magee) Ellis in rural Lyon County Kansas. After graduating Emporia High School, an independent and strong-willed Joyce left her home in Emporia to pursue her dream of becoming a nurse. She enrolled at the University of Kansas Medical Center and moved in with a fellow student who introduced Joyce to Benjamin Friesen. Ben and Joyce were married April 4, 1953.

Joyce served as a nurse in hospitals around the country as her husband continued his education. When they eventually settled in Lawrence, Kansas in 1960, Joyce took some time off work to raise her four children. In 1970, Joyce returned as an operating room nurse at Lawrence Memorial Hospital, where she worked until she retired in 1996.

Joyce cared deeply for her family and her community. She volunteered with the American Red Cross, Meals On Wheels and L.I.N.K, and was active in the First Southern Baptist Church. Although she was a working mother, Joyce always made time for her friends and neighbors, preparing food and visiting people in need. In their retirement, she and Ben traveled the world, touring Europe, China, Egypt, Israel, Australia, and Uzbekistan.

Joyce and Ben were happily married until Ben's passing in April of this year. Joyce knew her husband was waiting patiently for her and after several months she was ready to join him. Her daughter brought her home and Joyce Friesen passed peacefully in her sleep on September 25, 2020. She is survived by her sister Wilma, her four children: Stan, Rick (Lynn), Karen, and Judy, and six grandchildren: Aryn (Spencer), Ben, Josh, Emily, Chris and Maggie.

A memorial service will be held at a later date. In lieu of flowers, please send memorial contributions to the American Red Cross or Lawrence Memorial Hospital Health Foundation and may be sent in care of Warren-McElwain Mortuary, 120 W. 13th Street, Lawrence, KS 66044.

For more information or to post an online condolence visit warrenmcelwain.com.