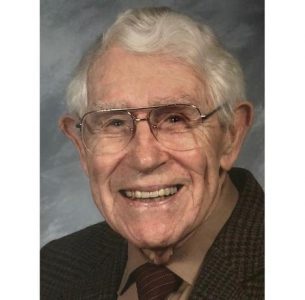 Richard (Dick) Schiefelbusch, 102, passed away peacefully on September 23, 2020 at Lawrence Presbyterian Manor in the company of family. Dick touched the lives of many people with his humor, wit, and positive outlook on life. He viewed each day as a new adventure, and helping others became his life's mission. He enjoyed gardening, writing, KU basketball, golfing with buddies, creating aphorisms, birthday celebrations, and he had an abundance of friends and colleagues who brightened his days, especially in his later years.

Dick was born on July 23, 1918 in Osawatomie, KS, the son of Edward and Emma (Martie) Schiefelbusch. He graduated from Pittsburg State Teacher's College and taught school for a year before joining the military at the start of World War II. He married Ruth Magee on September 20, 1942 in Elko, Nevada during flight training. Dick was an Army Air Corps Lieutenant and became a navigator on B-24 bombers. His plane was shot down in May 1943, and he spent 2 years in POW camps in Germany. He was freed from prison camp by General Patton and his troops and returned home in June 1945.

Dick was a Distinguished Professor Emeritus of Speech, Language, and Hearing Sciences. He earned his PhD from Northwestern University and returned to Kansas in 1949 to start the KU Speech and Hearing Clinic. In 1955 he became the Director of the Bureau of Child Research and retired from KU in 1991.

Memorial contributions can be made to KU Endowment in Honor of Richard Schiefelbusch, PO Box 928, Lawrence, KS 66044, 785-832-7400. To give online: kuendowment.org and click the red "Make a Gift" at the top center. For more information or to post a condolence go to warrenmcelwain.com.

Dick's ashes will be interred at Pioneer Cemetery (west KU campus, south of the Lied Center) in Lawrence, Kansas at 2:00 p.m. on Monday, October 5th. Due to COVID-19 and safety precautions, we are asking family and friends to please respect and comply with social distancing and wear a mask. A celebration of life will be planned for July, 2021, at Plymouth Congregational Church.