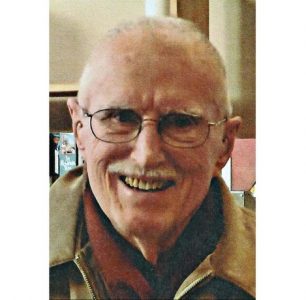 Beloved and devoted husband, father, grandfather, and great grandfather Lucian B. "Lou" Hammer, Jr., a six decade resident of Lawrence, Kansas passed away September 11, 2020 due to a brief respiratory illness at 96. He was born 9/14/23 in Marion, Kansas, to Lucian, Sr. and Mary Hammer, and was raised with his sister, Yvonne, in Claflin, Kansas. 1941 graduate of Claflin High School. After graduating from the University of Kansas in 1949 he worked at the local Lawrence Paper Company for 38 years, retiring as their purchasing agent, and was a longtime and faithful member of Immanuel Lutheran Church since 1950, including many years as their head usher and day reader, and a member of Lutheran Men's Club.

A child of the 1930's Great Depression, he learned early to appreciate and respect the value of discipline, hard work and a dollar, willingly shared what he had with others in need, and gave every person their due no matter what their station. He was a U.S. Marine Corps veteran, serving his country for three years with the 1st Marine Corps Air Group, MAC 24, on Bougainville in the South Pacific Solomon's during World War II, and was a Life Member of the Veterans of Foreign Wars and the American Legion, also as a member of the Marine Corps League, passing along his patriotic beliefs and ideals to his sons and others. He was a member of the U.S. Marine Corps Association, and a Life Member of the American Legion and VFW.

Ever the Jayhawk booster, after he graduated the University of Kansas business school, B.S. in Business, he was a Life Member of the K.U. Alumni Association, a Life Member of the Retiree Club, and a Life Member of the Alumni Gold Medal Club. He was also a Member of the Memorial Hospital Endowment Association (Hi Five League. During the ensuing years he enjoyed watching four generations of K.U. athletes compete. He was a player for the K.U. baseball team three years as a pitcher, called "Lefty-Lou," and a member of the Baseball Diamond Club, and the K-Club, and to his last days stayed in regular contact with some of the other surviving members of his original K.U. baseball team for over 50 years. He was also active in local civic activity, as a 48 year member of the former Luncheon Cosmopolitan Civic Club, was a Past President, received its Distinguished Service Award, and the Lawrence Horse Shoe Association, winning many trophies at area tournaments.

He was predeceased by his wife of 63 years, Lorraine, his mother and father and his sister, Yvonne Westbrook. Mourning the loss of a good and decent man are his two sons, Robert Hammer and wife Malinda, Gary Hammer and wife Julie, as well as six grandchildren and eleven great grandchildren.

After a life well-spent, Lou Hammer will be remembered by those who knew him best as a loving hero to his family, a loyal patriot to his country, and a faithful servant of God. He will forever be known as generous, humble, and devoted to family, friends and faith. While we have no doubt he is resting comfortably in eternal peace with his Maker and reunited with his beloved wife on this day, he will be deeply missed by all of us left behind on this side of the veil, until we all meet again. All who knew him celebrate his life and his legacy.

No public memorial service will be held due to the current situation. In lieu of flowers, memorial gifts may be made to Immanuel Lutheran Church, 2104 Bob Billings Parkway, Lawrence, KS or may be sent in care of Warren-McElwain Mortuary, 120 W. 13th Street, Lawrence, KS 66044.

For more information or to post an online condolence, please visit www.warrenmcelwain.com.