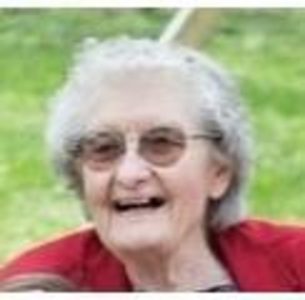 Mary Lucretia Vannicola was the third child born to Alva and Maxine (Wolf) Goff on April 16, 1932, on her grandparent's farm in Graham County, KS. She graduated from Hoxie, High School in 1950. She worked at Farmers and Merchants State Bank in Colby for six years. While working at the bank, she met Louis Vannicola. They married on December 4, 1955, in Hoxie, Ks. Their three sons were born in Hoxie.

In 1965 Louis and Mary moved to Lawrence, Ks. Mary worked for Weaver's Department Store for 40 years until she retired in 2007. She met many wonderful people at Weaver's, and many became life-long friends. After her retirement, she and several of her friends loved to travel to Branson, Mo. Her stories of the trips to Branson entertained her family at many gatherings.

Mary was a member of St. John the Evangelist Catholic Church and the Order of the Eastern Star in Hill City, KS.

Her husband, Louis, preceded her in death on July 4, 1997. Mary kept in touch with his family and is survived by nieces and nephews in Pennsylvania who remember her fondly.

Memorial services will be held at a later date due to COVID-19.

Memorial contributions may be made in her name to Just Food or St. John Catholic Church and may be sent in care of Warren-McElwain Mortuary, 120 W. 13th Street, Lawrence, KS 66044.