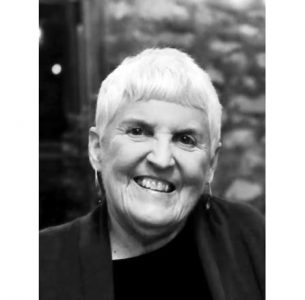 Dr. Bricke, who was known by all as "Hodgie," (a name she selected for herself as a child), had a life-long passion for international education, her family, cooking, reading, gardening, and all things Scotland.

Born July 2, 1939 in Tulsa, Oklahoma, Hodgie attended Saint Mary's College in Notre Dame, Indiana, before pursuing a Master's Degree in medieval history at Fordham University in New York. She moved to Lawrence in 1963 to attend KU as part of a doctoral program in European history.

She married John "Jack" Bricke in 1964 and received her Ph.D. in Modern European History from KU in 1972. Hodgie took a position as a program assistant for International Programs at KU in 1989, becoming Assistant Dean in 1991, Interim Co-Associate Vice Provost in 2007, and finally Assistant Vice Provost in 2009. During those years she assisted in making KU one of the nation's leaders in student participation in study abroad programs. Hodgie particularly focused on the Fulbright program, working with 20 to 30 students annually as they applied for Fulbright scholarships to go abroad. She also brought as many as 100 foreign educators to KU as part of the Fulbright graduate direct exchange program. Hodgie was also awarded two Fulbright grants herself for International Education Administrators, first to Germany in 1993 and then to Japan in 2000. She received the "Outstanding Service to the Fulbright Program Award" from the Institute of International Education in 2010.

Up until her death, Hodgie swam several miles three times a week, was a regular parishioner at St. Lawrence Catholic Campus Center, and was a weekly volunteer at Small World, a program for international women living in Lawrence, where she first worked with children and then their mothers helping them to learn English and other skills.

Hodgie is survived by, among others, her husband, Jack; her son and daughter-in-law Ian and Jessica Bricke and granddaughter Pilar Bricke, all of Los Angeles, California; her brother and sister-in-law Pat and Georgia Shaw of Bethesda, Maryland; her sister Barbara Shaw of Minneapolis, Minnesota; her sister and brother-in-law Mary Shaw and Michael Mahar, of Milwaukee, Wisconsin; nephews J. Brendan Shaw, of Dayton, Ohio, Mickey Mahar of Berlin, Germany; and nieces Brigid Shaw of Boston, Massachusetts, and Nicole Merrill of Eugene, Oregon. Her parents John Bennett Shaw and Margaret Fitzgerald Shaw and her sister Catherine Shaw are deceased.

A memorial service will be held at St. Lawrence Catholic Campus Center (1631 Crescent Rd, Lawrence, KS 66044) at 2pm on Saturday, February 1st. A subsequent celebration of life will be announced at a future date. In lieu of flowers, the family requests that donations be made to Small World (http://smallworldlawrence.blogspot.com/p/contact.html) and may be sent in care of Warren-McElwain Mortuary, 120 W. 13th Street, Lawrence, KS 66044.