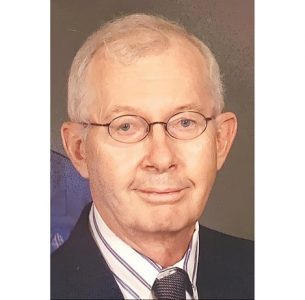 Richard (Dick) Duane Shaffer, 77, of Lawrence, died January 14, 2020, at Brandon Woods Assisted Living from complications of Parkinson's Disease. He was born December 30, 1942, to Cecil Ray and Virginia Fuller Shaffer, in Wichita Falls, TX, where his father served in the Air Force. After returning to the family home in Pratt, KS, at the age of one month, Dick grew up in Pratt, KS, graduating from Pratt High School in the class of 1960. He graduated from the University of Kansas in 1964 with a Bachelor of Science degree in Chemistry. He received a Ph.D. degree in 1972 from Iowa State University in Organic Chemistry. He was awarded a postdoctoral appointment at the University of Kansas with Dr. Takeru Higuchi beginning in 1972. After that he remained in Lawrence where he worked as a senior research scientist at Interx, and then Merck Research Laboratories until 1995. He also was employed as a senior research scientist at Oread Labs for 5 years.

On February 26, 1966, he married Harriet Ellen Will at Immanuel Lutheran Church in Lawrence, after meeting her in an honors economics class at KU. She survives as do their children, Susie (Mark) Fagan, Lawrence; Steve (Katie) Shaffer, Plano, TX; and Carol (Brian) Birnbaum, Leawood, KS. He is also survived by six grandchildren: Erin and Max Fagan, Ryann and Matthew Shaffer, and Andrew and Meghan Birnbaum, who were all a joy in his life. He is also survived by a brother, Robert (Linda) Shaffer, Cascade, CO; and two sisters, Pat Owens, Lawrence; and Phyllis McCart, Wichita, KS; a sister-in-law, Janet Will (Gene) Nuse, Fayette, MO; and numerous nieces and nephews. He was preceded in death by his parents and two nephews.

Dick was active in the Lawrence youth sports community, coaching baseball at DCABA and the Holcom League, as well as coaching soccer in the beginning years of KVSA. He served on the Board of Directors of YSI in numerous roles and worked very hard to make the current youth soccer fields a reality. He enjoyed golfing on any golf course he could find. Later in life, he took up playing duplicate bridge, which he had enjoyed in college. He spent many competitive hours at the Lawrence Duplicate Bridge Club. He was a true Jayhawk and Royals fan as well as a fan of his grandchildren's activities.

He was a member of Trinity Lutheran Church and was famous there for precisely cooking the corn at the annual Corn Fest. Memorials may be made to Trinity Lutheran Church, to LMH Endowment in care of Parkinson's classes, or to the ERC (Employee Recognition Committee at BW), in care of Warren McElwain Mortuary. Parkinson's Disease took away many of the things Dick enjoyed in his life, but he remained stoic and displayed a sense of humor through all the ups and downs of the disease. He received kind and considerate care from Brandon Woods Assisted Living staff, Keep Living at Home staff, and, in his last days, VNA Hospice.

A memorial service will be held at Trinity Lutheran Church at 11 a.m. on Saturday, January 25. Friends may visit with family on Friday, January 24, from 6 to 8 p.m. at Warren McElwain Mortuary or at a Celebration of Life event on January 25 from 5 to 7:30 p.m. at the Smith Center, Brandon Woods.

For more information or to post a condolence go to warrenmcelwain.com