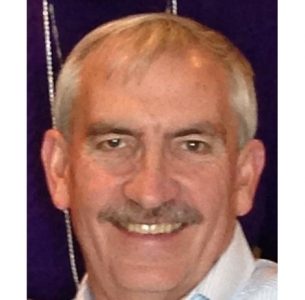 Steve Moreland Hornberger, 69, of Lawrence Kansas passed peacefully from this life into life eternal on August 26, 2020 at home with his loving family, after completing a courageous trek with multiple myeloma for the last six years.

Steve was born to Fremont and Louise Hornberger (nee Baldwin) on November 15, 1950. The second born of this hardworking family, Steve enjoyed growing up on a farm in southern Douglas County. He helped his father and brother raise cattle and crops until they moved to town when he was sixteen. He shared stories of going to Union School, a one-room school just south of the farm, and skating on the farm pond. His entire family was active in Worden Workers 4-H, with his personal highlight being winning with his grand champion steer at the Douglas County 4-H Fair.

Sheriff Rex Johnson hired Steve while he was still in high school to work as a dispatcher, thus setting his career path. He finished his bachelor's degree at KU with an emphasis in political science, and commuted to Warrensburg while working full-time to complete his Master's degree in Criminal Justice Administration from the University of Central Missouri. He retired in 2015 after serving 46 years in his chosen profession, including working for the Kansas Attorney General's office, the Kansas Securities Commission, and the Douglas County Sheriff's Office; his last position being Undersheriff. He served his country for six years in the Air Force Reserves.

Steve was a role model for many. He was honest, fair, hardworking, and a great listener. He never sought the limelight; rather being the steady rock that kept the organization and his family moving in the right direction. Many have shared the importance of Steve's leadership in their lives and personal careers. Recently, he enjoyed serving as an advisor to the Valor Selection Board, an organization that recognizes and honors our area first responders.

On October 19, 1980 Steve married Cindy and started a wonderful life full of love, travel, and friendship. They met in the Emergency Department where Cindy worked as a nurse. Soon after they got married their house was blown away by a tornado and they quickly learned what was most important in life. They are blessed with two sons, Ryan and Jeff and their wonderful daughter-in-law Jen. Having been baptized as a child, Steve rediscovered his faith as a young father and joined Grace Evangelical Presbyterian Church, where he and Cindy have attended for the last nearly 30 years. His best friends then and now are the families of Stratford Court, where he and Cindy raised their sons.

Steve leaves behind his brother Bob (wife Brenda), two nephews Jason (Jean) and Jordan (Robin) and his niece Leslie and their six children Lindsey, Luke, Sydnee, Rylee, Julian and Charlotte. In addition, he leaves Cindy's large family who he enjoyed immensely, often hosting family gatherings for holidays and special occasions. Family was the most important thing for him, and he dedicated his time to helping his sons grow up to be kind, hardworking men. He was a steadying force with the famous phrase, "Either it will or it won't", understanding worrying about things isn't always helpful and the importance of trusting God. Together the family traveled the world with Steve eventually visiting nearly 25 countries. Besides his love of travel, he enjoyed reading, staying current in politics, and hiking. His favorite hikes were walking on the Great Wall of China, and backpacking with his oldest son to Hole-in-the-Wall campground in Glacier National Park. To him, the outdoors was a manifestation of God's glory.

Steve expressed at the end of his life his gratitude for the wonderful staff at LMH Oncology Center and specifically Dr. Sharon Soule, who provided expert and compassionate care. The nurses and staff at the Oncology Center were exceptional and will long be remembered. Thanks too, to Dr. Gerald Pees for being his longtime primary care physician and friend.

Because of current health concerns, a service will be held next year when we can celebrate Steve's life. Memorials will be accepted for the Douglas County 4-H Foundation, an organization long supported by the Hornberger family. Memorials may be sent in care of Warren McElwain Mortuary, 120 W. 13th St., Lawrence, KS, 66044.