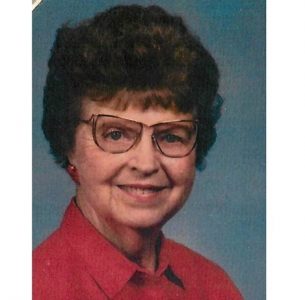 Ruth was born on February 13, 1920 to Charles and Olga Gilkison in Larned, Kansas. She grew up on a farm near Zook, KS and spent one year in California. Ruth was a big sister to three younger brothers, John, Dwight, and Paul. She loved to laugh and tell stories about how she kept them in line.

Ruth graduated from Larned High School in 1937. In the Fall of 1937, she headed to college in Emporia, KS attending Kansas State Teachers College later know as Emporia State University. While there she met a young man named, William Harper Riggins. After earning her teaching degree, she and Bill were married in Zook, KS on July 20, 1941.

Soon after they were married, WWII began. They resided in Wichita, KS working for Boeing, building bombers. Ruth was a supervisor because she had a college degree which was unusual for women at that time. Later, when Bill spent 13 months in the Pacific serving in the Army, she cared for their two young daughters and managed through war time with many shortages and rationing.

After the war they settled in Severy, KS where Bill took over the family hardware store, Riggins Hardware that had been established in 1914. Ruth began teaching in the Severy Public Schools. Several years later, much to their surprise, they welcomed a son to complete their family. Ruth finished her teaching career at West Elk Senior High. They moved to Lawrence, KS in 1998 to spend their retired years. Unfortunately, Bill died in August of 2002.

Memorial contributions in Ruth's name can be made to the Trinity Lutheran Church in Lawrence or the Severy United Methodist Church and can be mailed to or left with the funeral home.