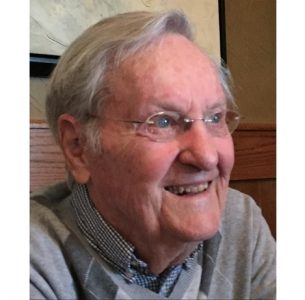 Francis Carr, 94, of Wellington, passed away Saturday, September 14, 2019 at his home in Wellington, KS.

Funeral services will be held at 11:00 A.M., Saturday, September 21, 2019 at the First Presbyterian Church in Wellington. Interment will be at the Prairie Lawn Cemetery in Wellington. Visitation will be Friday, September 20, 2019 form 9:00 A.M. until 8:00 P.M. at the Shelley Family Funeral Home in Wellington with the family receiving friends from 5:00 until 7:00 P.M. Memorials have been established with the First Presbyterian Church in Wellington and the KU Endowment Association and may be left with the Shelley Family Funeral Home 704 N. Washington, Wellington, KS 67152. To leave an online condolence please visit www.shelleyfamilyfh.com.

Francis Engle Carr was born January 31, 1925, the son of Ellis and Kathrina (Engle) Carr in Wellington, KS. Francis graduated from Wellington High School in 1942 and served his country in the United States Army Air Corps as a Bombardier on B-29’s and trained as a pilot. On June 5, 1948 Francis was united in marriage to Sarah Frances Phipps. Francis’s family association with banking in Wellington began around 1880 with his grandfather Jacob. His own association with what is now Impact Bank began in 1939 when he worked there part time. He continuously served as an officer or director from 1950 until September 15, 2019. Francis was very much a people person. He had a great memory and enjoyed keeping up with friends. He actively sent out over a hundred birthday cards every year. Francis was a longtime member and past president of the Kansas Bankers Association, as was his father. He was a member of the First Presbyterian Church and Beta Theta Pi Fraternity. Francis enjoyed traveling and was a huge KU Jayhawks fan.

He is preceded in death by his parents, and his wife Sarah in 2004.