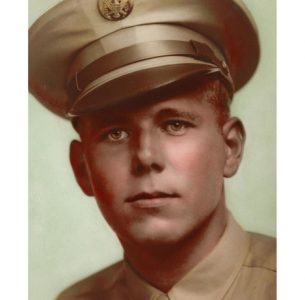 Ed grew up during the depression and began doing odd jobs when just a child. He worked for the Journal World part-time and was also in the National Guard before he graduated from Liberty Memorial High school in 1942. After graduation he attended the University of Kansas before enlisting in the Army Air Corps to help the World War II effort. He moved up to Technical Sergeant during the three years that he served our country. He trained soldiers how to use the guns in turrets in B-24 and B-29 bombers.

After returning from the war Ed graduated from the Chillicothe Business College. On June 1, 1947 he married his high school sweetheart Annette Schowengerdt at Danforth Chapel. In 1951 he began work as an accountant for the Jackman Family, which he continued to do for over 44 years.

Ed requested no service. Inurnment will be at Memorial Park Cemetery in Lawrence. Memorial contributions can be made to Lawrence Presbyterian Manor Good Samaritan Fund or the Lawrence Humane Society, P.O. Box 1260, Lawrence Kansas 66044. Ed will be missed by all that knew him.

Online condolences made at rumsey-yost.com