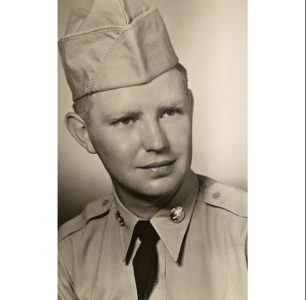 Funeral services for Donald "Don" Lloyd Gillihan, 91, Lawrence will be held at 11:00 a.m., Friday, November 15, 2019 at Warren-McElwain Mortuary in Lawrence. Entombment will follow at Memorial Park Mausoleum in Lawrence. Don passed away on Monday, November 11, 2019 at Neuvant House of Lawrence.

Don was born on September 4, 1928 in Chanute, KS, to Fred and Reba (Sparks) Gillihan. He graduated from Chanute High School and joined the United States Army.

He proudly served his country in the Korean War from 1950-1953. Don and members of his unit graced the cover of TIME magazine. He was Honorably discharged and received a Purple Heart along with several other honors including Good Conduct.

When Don returned from Korea, he worked at the Wax Plant in Chanute. They then moved to El Dorado, KS where he was employed at the oil refinery in Potwin, KS. Once he moved to Lawrence he began working at Farmland. Don eventually joined DuPont Manufacturing Plant as a team lead and retired in 1990. Lifelong friends were made at DuPont and for years they reunited for an annual gathering.

He married Katherine Ruth Soloman on September 4, 1958. They loved dancing, gambling, and traveling with friends, especially to Nevada and Louisiana. Last year they enjoyed celebrating their 60th wedding anniversary and his 90th birthday. Kathy survives of the home.

Don had a passion for fishing, hunting, cooking, Westerns, old time country music and spending time with his family. For many years he could be found chatting and coffee drinking with his buddies every morning at Munchers Bakery. He adored his grandchildren, "his babies", and often treated them to some of his favorites- donuts and bacon. Don was a true gentleman and those who knew him never saw him without a smile on his face.

The family will greet friends beginning at 10 a.m. prior to the service on Friday at the mortuary.

Thank you to the Neuvant House and their compassionate staff for going above and beyond and to the Visiting Nurses Hospice Care for their abundance of care.

Memorial contributions may be made in his name to either St. Jude Children's Research Hospital, Wounded Warrior Project or Visiting Nurses and may be sent in care of Warren-McElwain Mortuary, 120 W. 13th Street, Lawrence, KS 66044.