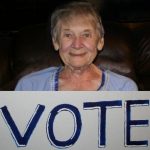 Anna (Turko) Slemmer of Lawrence, Kansas passed away on Monday, June 17, 2019 in her home with family by her side. Anna was born on April 16, 1937 in Poland to Peter and Julia (Baysa) Turko. Her early childhood was spent in Poland and in German and Soviet occupied areas during World War II. Due to the war and its aftermath, she was unable to begin her education until her family immigrated to the United States in 1947. Anna graduated from the University of Michigan with a Master’s degree in education, specializing in library sciences. Anna served as a librarian in Michigan where she met her husband, Bill, also a librarian. They eventually moved to Roseburg, Oregon where they raised son Jonathan until Bill’s death in 1980. Anna continued to work mostly as a librarian until her retirement from the VA in 1999. During much of this time, Anna was the head of a household that included her son, her mother, and her brother. Anna had a feisty spirit that people were drawn to and she enjoyed spending time with family and friends, but she also valued her independence and solitude.

She is survived by her brother, Peter Turko; son, Jonathan Slemmer; daughter-in-law, Kristi Neufeld; granddaughter, Olivia Slemmer; grandson, Nathaniel Slemmer, all of Lawrence; many nieces and nephews and relatives by marriage; and a special friend, Dan Gayman, of Eugene, Oregon. She was preceded in death by her husband, William Slemmer; mother, Julia Turko; father, Peter Turko; and sister, Irene Williams.

Anna loved nature and took continuing education classes to study birds, plants, flowers, rocks, and mushrooms. Her biggest passion was birding and she regularly participated in bird counts, built countless bird houses, wrote birding articles for The News-Review, and held officer positions in the Umpqua Valley Audubon Society. Anna considered her backyard to be a sanctuary and she would attract numerous birds there with feed, water, and shelter.

Anna was an ardent supporter of the Democratic Party and encouraged everyone she met to impact the system by voting. You might remember Anna’s passionate and provocative Letters to the Editor of local papers.

Some of her other favorite activities were to read books, listen to the news and National Public Radio, go to movies, and attend her grandchildren’s performances, concerts, and athletic events. She was also a supporter of the Umpqua Unitarian Universalist Church.

With the many challenges Anna endured, especially during her childhood years and after losing her husband, Anna was resolute and faced these setbacks with strength and courage. Anna was fearlessly devoted to her family and a wonderful mother and friend to her son. Peace and social activist, philanthropist, educator, collector and sharer of words, author, listener, inspirer, believer, and egalitarian appreciator. We congratulate Anna on a life well lived.

Memorial contributions may be made in her name to Douglas County Visiting Nurses Association, 200 Maine Street, Suite C, Lawrence, KS 66044.

Condolences may be sent at rumsey-yost.com.