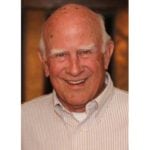 Baldwin City, KS – Funeral service for Donald Emory Parker, 84, will be held at 11:00 a.m. Friday, April 20, 2018 at First United Methodist Church in Baldwin City, KS. Interment will be held at Oakwood Cemetery in Baldwin City. A reception will be held prior to the service at 9:30 a.m., in the Collins Center on the Baker University Campus, 505 8th Street, Baldwin City, KS 66006 Don died peacefully in his home on Saturday, April 14th, 2018. He was born June 17th, 1933, in Kansas City, Missouri, son of Howell Alton and Mable Dale (Harris) Parker. He attended various elementary schools in the Kansas City area, and graduated from Paseo High School in 1951. Don went on to receive a Bachelor’s degree in Economics and Business from Baker University in 1955. During his time at Baker University, he was a member of Sigma Phi Epsilon, where he held many offices, and was also a member of the Baker University Letterman Club. After graduation, Don volunteered for the Officer Candidate School (OCS) program of the United States Marine Corps. Upon successfully completing the OCS program, he was awarded commission of Second Lieutenant and served on the east and west coast, and several places in Asia. He was discharged from active duty in the fall of 1958 as First Lieutenant, and served in the reserves for the remainder of his military commitment. Don joined the Employers Reinsurance Corporation on February 1st, 1959 and progressed within the company both in the Kansas City and San Francisco offices. He retired after 35 years to the day in Kansas City, as President of First Excess and Reinsurance Corporation, a subsidiary of Employers Reinsurance. He was a member of several United Methodist Churches during his life, serving for eight years on the Board of the United Methodist Church for Higher Education in Nashville, Tennessee. He also served on the Baker University Board of Trustees for many years, holding many committee chairs and offices, including Chairman of the Board of Trustees. The Parker/Dick family was named Family of the Year in 1987, and Don was Alumni of the Year in 1988. In addition, Don was awarded an Honorary Doctor of Letters from Baker University in May, 2017. Don was an avid golfer, and was a member of several clubs, both in the Kansas City and San Francisco areas. He also served on several club boards and associations. He married Paula Marie Dick on December 30th, 1956, and they were happily married for more than 50 years. Paula passed away on October 11th, 2007. Don is survived by his family, including two daughters, Dana Marie Parker Ortiz, husband Leonard, and Donna Lynn Parker Carlson, husband Steve, and four grandchildren, granddaughters Emily and Jamie Ortiz, Alexandra Carlson, and grandson Nico Carlson. He married Charlotte Wilcox on April 17, 2010 who continues to reside at the home. The family will receive friends at WarrenMcElwain Mortuary in Lawrence from 6¬8 p.m., Thursday, April 19, 2018. The family suggests memorials to the Paula Parker Endowed Scholarship or the Charlotte Parker Endowed Scholarship, both at Baker University, PO Box 65, Baldwin City, KS 66006 or may be sent in care of Warren¬McElwain Mortuary, 120 W. 13th Street, Lawrence, KS 66044. For more information or to post a condolence go to warrenmcelwain.com. Please sign this guestbook at Obituaries. LJWorld.com.