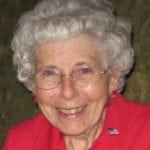 Funeral services for Mildred “Millie” York Cooper, 91, of Lawrence, will be held at 1:00 p.m. Monday April 27, 2015 at Warren-McElwain Mortuary in Lawrence. Burial will follow at Memorial Park Cemetery. She passed away Wednesday, April 22, 2015 at Lawrence Memorial Hospital.
Millie was born March 18, 1924 in Vinland, KS the daughter of Oscar T. and Elizabeth (Aberle) York. She was the sixth of eight children born and raised on the family farm. She attended Blue Mound School, Oread High School and KU.
While attending Oread High School, Millie met her husband of 71 years, James W. Cooper, who survives of the home. They married on July 2, 1944 in Lawrence and immediately began the travels of a training Army Air Corp B-24 pilot with stops in Hondo, TX, Waco, TX and Nashville, TN. After the war, they returned to Lawrence to embark on the adventure of raising an active family.
Millie relished her roles as a wife, mother and homemaker. She was a happy, caring mother of three, with a mischievous sense of humor and quick smile, who loved participating in the activities of her family. She generously gave of her time outside the home as a Cub Scout Den Mother, Girl Scout Troop Leader, PTA room mother and volunteer worker. In addition to her children, Millie liked to garden; growing fruits, vegetables and flowers in gardens around her home. She was a long-time member of Plymouth Congregational Church where she taught Sunday School and volunteered at their thrift shop. Later in life, as a three-time survivor of cancer, Millie was a volunteer for the American Cancer Society and a Relay of Life participant.
Other survivors include one daughter, Rosie Shelton (husband Charlie), Lawrence; two sons, Gary Cooper (wife Betty Jo), Albuquerque, NM, Brian Cooper, Shawnee; two grandchildren; Joel Angelone, Mountain View, CA and Laura Flaxbeard (husband Zach), Raymore, MO; one brother, Frank M. York, Olathe, KS; and two sisters, Frances Y. Abbott, Haddon Heights, NJ, and Alita Y. Cooper, Lawrence. She was preceded in death by her parents; three brothers, Fred L. York, James W. York and Raymond A. York; and one sister, Lucile Y. Paden
The family will greet friends Sunday, April 26, 2015 from 4:00 p.m. to 6:00 p.m. at the mortuary.
In lieu of flowers, memorial contributions may be made in her name to The Oncology Center at Lawrence Memorial Hospital and may be sent in care of Warren-McElwain Mortuary.
Online condolences may be sent to www.warrenmcelwain.com.
Please sign this guestbook at Obituaries.LJWorld.com.