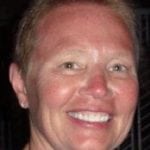 Joyce Ann Krones, RT(C) (CVIT), 52, passed away at her home in Lawrence, KS, on August 4th after a two-year battle with cancer. Her family and beloved dog Daisy were at her side. A Memorial mass will be held at 10am at St. John’s Catholic Church in Lawrence, KS., on Saturday, August 20th. Interment will be at a later date.
Joyce was born on May 26th, 1959, to Leo G. and Marcella (Sally) M. (Lambert) Krones. She was proceeded in death by her father, her paternal grandparents Joe and Marie (Reilly) Krones as well as her maternal grandparents Russell and Helen (Tholen) Lambert. She is survived by her mother, her son Joshua A. (Sally) Pedraza of Lawrence, KS, and his daughter Eve; her daughter Samantha B. Pedraza of Oklahoma City, OK; her sister Susan (Stan) Kitten of Slaton, TX; her brother John (Kriss) Krones of Lawrence, KS; and sister Brenda (Liam) Riggs of Lawrence, KS. She is also survived by six nieces, one nephew and a large circle of aunts, uncles and cousins.
Joyce graduated from Gilman High School and she received an Associate of Applied Sciences degree from Kankakee Community College. She worked at Texoma Medical Center in Denison, TX, as well as several hospitals in the Kansas City area. Most recently, she worked at Lawrence Memorial Hospital in Lawrence, KS. Joyce was licensed in Kansas with certification in cardiovascular interventional technology.
Joyce was an animal lover. She volunteered for Operation Wildlife and the Lawrence Humane Society. She was a member of St. John’s Catholic Church in Lawrence. She also traveled extensively. She enjoyed spending time with her family and her French bulldog Daisy and was an avid reader.
The family requests memorials be sent to: LMH Oncology Center, 330 Arkansas, Suite 105, Lawrence, KS 66044.
Arrangements by the Redenius Funeral Home in Gilman, IL.
Please sign the guest book at redeniusfuneralhomes.com.