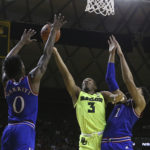 Baylor guard King McClure (3) is fouled by Kansas guard Marcus Garrett (0) as he attempts a shot against Kansas forward Dedric Lawson (1) in the second half of an NCAA college basketball game, Saturday, Jan. 12, 2019, in Waco, Texas. (AP Photo/Jerry Larson)

The Jayhawks won’t be perfect on every possession, on offense or defense, in this one. But, if by the end of the game they have more points than Baylor, they will be perfect in one area — games played at home this season.

KU enters the regular season finale 15-0 this season at Allen Fieldhouse, including an 8-0 mark in Big 12 play. While that unbeaten mark, pulled down by KU’s 3-6 mark in conference road games, was not enough to lead to a 15th consecutive Big 12 title, the Jayhawks are operating this week with a sense of pride in going undefeated at home for an entire season.

“I think that’s one thing we can look at as motivation and we’ve put ourselves in the opportunity to do that,” KU coach Bill Self said earlier this week. “For this team to run the table would be great. That would mean a lot to this team. And Baylor’s been nipping at us pretty hard the last several games we’ve played them at home. They’ve always come ready to play.”

While Saturday’s game will be played with several KU students already away on Spring Break, Self said there should be enough in the building to deliver a decided home-court advantage, which the Jayhawks have enjoyed year after year.

Added junior Mitch Lightfoot of what was driving this team heading into the finale now that the streak is dead: “Same motivation as any other game. It’s a home game, it’s important to us, a lot of it matters with seeding. I think we’re all competitors and we want to go out there and compete and that’s all the motivation we should really need, to be honest.”

For some teams, it’s competing harder. For others, it’s getting hot from the outside. But for Baylor, it’s the Bears’ ability to steal extra possessions and dominate the glass that gives them the best chance of pulling an upset against Kansas in the regular season finale for both teams.

Baylor, which outrebounds its opponents by nearly eight boards a game, is the second best offensive rebounding team in the nation, grabbing offensive rebounds on 38.2 percent of their opportunities. The national average, according to KenPom.com, is nearly 10 full percentage points lower at 28.4. In Big 12 play alone, Baylor ranks first at an even better clip of 38.6 percent.

The last time these teams faced off, Baylor grabbed a whopping 26 offensive rebounds — 50 percent of available opportunities — and that number played a huge role in the Bears making a game of it despite trailing by 20 points late in the second half.

Asked this week what role rebounding would play in this one, KU freshman David McCormack wasted no time in giving his answer.

Said Self of the Bears’ strong rebounding reputation: “Baylor’s always been a good rebounding team, historically. But I do think that they attack the ball about as well as anybody.”

Leadership has been something the Jayhawks have been shaping and searching for throughout the 2018-19 season and that search, in many ways, continues today.

While leaders have emerged in spots and in certain ways, the Jayhawks still seem to be missing that one voice and one player who, no matter what’s happening on the floor, can calm things down and bring the team together.

“(Junior forward) Dedric (Lawson), I think, is the best we’ve got, without question, from positive and talking and everything,” Self said earlier this week. “But even with that being said, this isn’t being negative, Frank (Mason) didn’t develop that overnight and neither did Devonte’ (Graham). But certainly we have potential to have one or two of those guys in our midst, but it’s going to take a little time.”

At this point in the season, finding and defining team leadership takes on a new meaning. It’s not exactly identifying the one player who talks the most or inspires his teammates to play harder. Sometimes it comes from the guy who can simply get everybody moving in the same direction, be it with his words or his actions.

“All year long,” Self said when asked if he had seen that as an issue for this team. “But that’s not selfishness. That’s leadership. That’s intangibles. It’s starting to fall apart at your business or whatever, who wouldn’t say, ‘Well I know I can fix this.’ So you go do something to really help everybody else out, but when you help somebody that way, maybe it doesn’t complement what other people are trying to do. That’s more what it is. It’s relying on each other, (and) that does happen quite often with experience. And some kids are more experienced than others.”

Part of the reason for his success is Vital’s strong frame, which stands just 6-foot-5 but a solid 230 pounds. But Vital’s heart and desire are just as strong as his build and the BU forward constantly shows a willingness to sacrifice his body for the good of his team no matter what the circumstances are.

Vital ranks 9th in the Big 12 at 6.8 rebounds per game and it will be up to a host of Jayhawks to keep him away from any misses that go up. But with the Jayhawks featuring a double-digit rebounding menace of their own in the paint, in junior forward Dedric Lawson, this could be a perfect game for Lawson to take the Vital factor as a personal challenge.

Lawson, who enters with a Big 12-best 19 double-doubles on the season, ranks second in the Big 12 at 10 rebounds per game, just a half-rebound per game behind West Virginia freshman Derek Culver.

Although the two players go about their rebounding in distinctly different manners — Vital with power and athleticism and Lawson with length and smarts — the two players have equally important roles on their teams when it comes to controlling the glass. And whichever player finds his way to more rebounds in this one could play a big role in which team comes out on top.

Although the Big 12 streak is dead, KU’s streak of 35 consecutive wins in home finales is on the line in this one and the Jayhawks are approaching this game as if it still means a lot.

It’s not for seeding in the Big 12 tournament. The Jayhawks are locked in as the No. 3 seed next week in Kansas City, Mo. And it won’t have any role in which team wins the Big 12 title. That’s down to Kansas State (vs. Oklahoma) and Texas Tech (at Iowa State) who are tied at the top.

But it does have something to do with pride and the Jayhawks believe it could be a key piece in what they hope will be a hot postseason run that helps make KU fans forget about the end of the streak.

“(This one’s) very important,” said KU freshman David McCormack. “At the end of the year, you always want to finish strong and finish with your best effort.”

One thing that has kept Kansas from doing that night in and night out this season has been consistency in a variety of areas.

That cost them at Oklahoma on Tuesday night. But not just in terms of missing shots from behind the arc or breaking down on defense.

“Even though (OU) handled us the other night, they were a really good basketball team the other night. We would’ve had to play great to win that game,” Self said. “And if we couldn’t play great, we had to make them play poorly. And that’s what this team has not done. It’s not so much how we play, it’s how we make other teams play that probably is the reason why we didn’t have a better opportunity to win the league this year.”

With KU’s lone senior Lagerald Vick still away from the team on a leave of absence, Kansas will have to find a way to make up for the 18 points, on 6-of-8 3-point shooting, that Vick delivered in KU’s win in Waco, Texas.

The Jayhawks are 16-0 all-time against Baylor in Lawrence, including a 15-0 mark inside Allen Fieldhouse.

Las Vegas lists KU as a 9-point favorite and both teams are entering this one on the heels of losses, KU at Oklahoma on Tuesday night and Baylor at home to Oklahoma State on Wednesday.