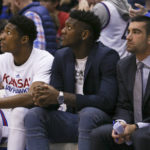 Although there does not appear to be any kind of ruling on his appeal on the horizon, this week still could be an important time for the future of Kansas sophomore Silvio De Sousa.

De Sousa, who is facing a 2-year suspension from the NCAA for his guardian’s involvement in a pay-for-play scheme that has been part of a bigger federal investigation into corruption in college basketball, did not play during the 2018-19 season and has until Sunday to decide whether he, too, would like to throw his name into the ring of Jayhawks testing their NBA Draft stock.

Sunday — at 10:59 p.m. — marks the deadline for underclassmen to declare for the 2019 NBA Draft, and such a move could be in play for De Sousa, who many believe has a future in professional basketball.

“I would totally understand and encourage him to look into it, just because of the unknown with the NCAA,” KU coach Bill Self told the Journal-World when asked recently about De Sousa’s status. “If he can’t have an answer (about his college eligibility) by a certain time, at least he would’ve tried this and then hopefully he’d have an answer by the time that he would have to pull his name out, if that’s what would be in his best interest.”

May 29 would be the next key deadline for De Sousa in that scenario. That’s the final day underclassmen can pull their name out of the draft pool and retain their college eligibility. And declaring before Sunday’s deadline would give KU and De Sousa six more weeks of waiting time to see if his appeal leads to a shorter suspension before any kind of definite decisions are made about his future.

According to Self, there is no time frame, as of today, for a ruling on De Sousa’s appeal, and KU remains committed to fighting for De Sousa’s eligibility.

“He obviously has been patient and waited his time and everything, but those days are numbered now,” Self said. “It’s not like you have an infinite number of days to try to hammer this out. You’ve lost a year. Can’t get that back. All we can do is fight for next year and, certainly, we’re doing that.”

De Sousa’s suspension was handed out by the NCAA on Feb. 1. The next day, KU Athletic Director Jeff Long announced in an impromptu press conference before KU’s home game with Texas Tech that the school planned to appeal the suspension.

Although more than two months have passed since then without much news about De Sousa’s future surfacing, Self said his feelings about the situation had not changed.