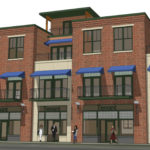 This rendering shows the view from Vermont Street of a new multistory building proposed by former City Commissioner Bob Schumm for the 800 block of Vermont Street.

If plans hold true, a major new building is coming to Vermont Street — and likely more competition for a space in the city parking garage next to the library will materialize too.

This new proposal is a four-story building that largely eliminates the condos. But the biggest difference may be that the building won’t have an underground parking garage. The building will take advantage of the special zoning that exists in downtown that allows projects to be built without any on-site parking.

Where will all the people park? Schumm figures the library parking garage is a likely answer. He notes that the City Commission — while he was on it actually — agreed to add an extra level of parking to the garage. Downtown property owners actually have a special assessment on their property tax bills to help pay for the extra floor of parking.

“That was done to encourage more development,” Schumm said. “I’m not worried about the amount of parking that is still available. But the city does need to be cognizant of the fact that it needs to create more parking when it gets the chance.”

This project may end up being a reminder of that idea. As planned, the building could generate a significant number of new employees residing in the 800 block of Vermont. The entire second floor of the building is designed for office space. Schumm plans to fill it with 42 small, one-person office spaces. He said his other downtown building at 719 Massachusetts has about 30 of those small office spaces, and demand is high from a variety of businesses that maybe have been operating out of a home but want a more formal office setting without all the expense. The concept allows the offices to share some spaces, like a reception area, conference room, break rooms and other such features.

Those 40 some office users are likely candidates to use the approximately 320-space Vermont Street parking garage that serves the library, the Lawrence Aquatic Center and other uses in the downtown area.

Plans for Schumm’s ground floor property may create some additional parking demand for the two-hour surface lot across the street from the project. The ground floor space will have about 8,000 square feet, and could easily be divided for up to three tenants. Schumm said he’ll be focusing on attracting some commercial service businesses instead of traditional retail. That could mean beauty salons, banks, law offices, health care providers and other such tenants 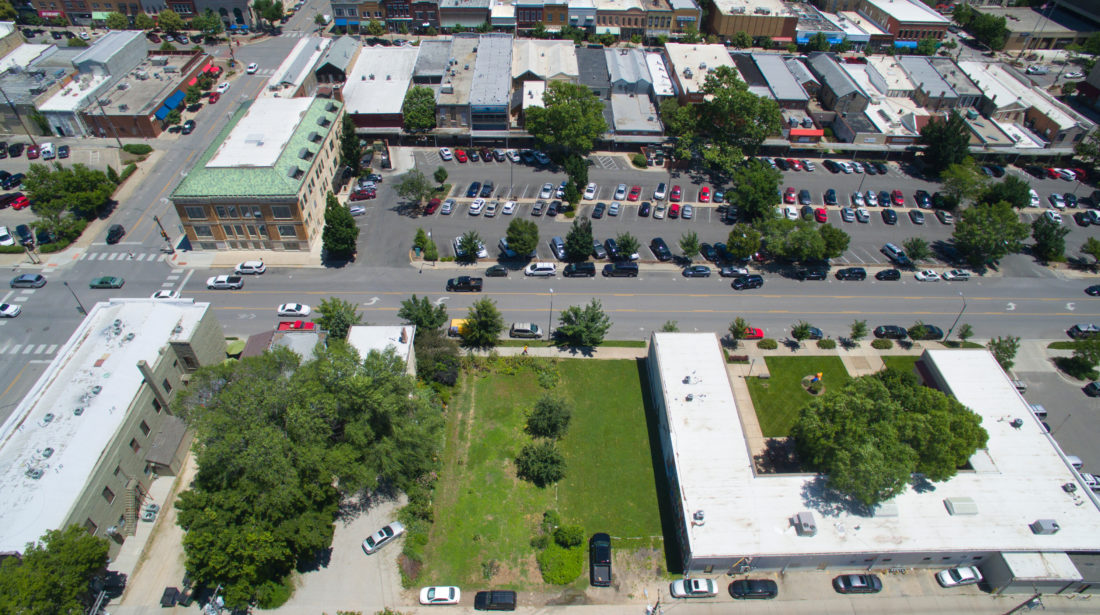 “It is not just in Lawrence. It is everywhere,” Schumm said. “I’m not going to pin my hopes on retail. But I think the commercial services area is pretty strong. You can’t buy a haircut on the internet, or get your toes painted. At least not this year.”

The project does include one condo. It would be on the third floor, and also would occupy what there is of a fourth floor — which is basically a small sunroom area. Schumm said he hopes to live in the condo. It would include a two-car garage located on the main floor of the building.

Schumm’s last proposal included a set of financial incentives from the city. After much debate, the project qualified for a 75 percent tax rebate through the Neighborhood Revitalization Act, plus a potential industrial revenue bond that would have allowed for a rebate on some sales taxes paid for building materials.

Schumm hasn’t proposed a specific incentives package for this project. Instead, he said he hopes to turn the project’s financial information over to a city-hired consultant that is tasked with studying the feasibility of projects seeking incentives. If the consultant makes a finding that the project needs an incentive to be competitive, then Schumm will apply for one. He said a combination of an NRA tax rebate and an IRB sales tax rebate was the most likely type of incentive for the project.

The project still must win some design approvals from the city’s Historic Resources Commission. Any incentive request would have to win approval from the City Commission. Last time, Schumm spent about three years seeking approvals for the previous project. He hopes to get approvals much sooner this time. He would like to start construction early next year.

This rendering shows the view for a proposed building in the 800 block of Vermont Street. This view is from the back of the building.

How a project that doesn’t provide any of its own parking will fare with an incentive request will be worth watching. If approved, it may open up some other development possibilities in downtown.

Schumm’s failed project also might be instructive. I asked him what he thought it meant for the future of downtown condos. He said he learned that Lawrence buyers aren’t yet to the point where they are willing to pay condo prices for properties. He said buyers are still comparing condo prices to what they would pay for a standard house in a nonurban setting.

He said those prices aren’t very comparable, currently. His past project tried to sell unfinished condos for $295 a square foot. For a 1,200 square foot condo, that comes to $354,000, plus costs for interior finishes. There are lots of new 1,200-square-foot homes that sell for cheaper than that.

Schumm said condo construction is more expensive because of the cost of downtown land, the cost of building a parking garage, and the extra construction expenses that come with working on a physically tight job site.

Schumm ended up getting contracts for three of the 11 condos he had on the market. Schumm said there might have been some other ways to bring the per unit costs of the project down, but it likely would have opened another debate in downtown.

How tall should future buildings be?

“If you could get some scale going,” Schumm said. “Maybe 10 stories tall with 30 or 40 units, then you might be able to get your cost per unit down quite a bit.”

Another debate for another day.