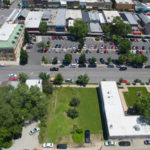 A local developer has withdrawn his plans to build a five-story mixed-use condominium building in downtown Lawrence.

The developer of the Vermont Place project, Bob Schumm, said he decided to abandon the project as proposed because not enough people were interested in purchasing a condo. The condos were to comprise three floors of the building, but Schumm, who is also a former city commissioner, said he now plans to pursue a project without condos.

“It was an idea and I tried to pursue that idea, but when you see that it’s probably just not going to work out right then you’ve got to adjust and try to move forward,” Schumm said. “And that’s what I’m doing, is trying to come up with a project that works.”

Last year, the City Commission narrowly approved economic incentives for the project. The building, which would be constructed on two vacant lots in the 800 block of Vermont Street, was to include an underground parking garage, commercial space on the ground floor, office space on the second floor and condos on the upper three floors. Schumm planned to occupy the condo unit on the top floor and one of the condo units was to be permanently designated as an affordable housing unit.

Schumm said he did not want to build a speculative project and therefore planned to pre-sell all 11 of the condos before moving forward. He said that after spending the last 10 months marketing the condos, he had pre-sale agreements for only three units. When accounting for the unit Schumm planned to occupy himself and the affordable housing unit, that left six units available.

The project received a 10-year, 75 percent property tax rebate through the Neighborhood Revitalization Act, as well as a sales tax exemption on construction materials. The two incentives would have had a combined value of more than $1 million had the project gone forward. Schumm said he notified city staff last week about his decision. Assistant City Manager Diane Stoddard said in an email to the Journal-World that if a plan changes significantly from what was approved by the City Commission, the approved incentives cannot proceed. Stoddard said a reduction to three stories and elimination of the parking structure would be a significant modification.

“That’s what you’re faced with, is the competitive pressure of existing housing space versus condo space,” Schumm said. “If we had a much larger urban footprint with other condos in it, then there would be a condo market where you could say, yeah, that’s about what it cost to do this.”

Because the condos were unfinished, or “white box” condos without interior walls and finishes, the cost of completing the condos may have also played a role, Schumm said. He noted the rising costs of materials, such as lumber and steel, due to recently imposed trade tariffs. Schumm estimated the cost to finish the condos would have been an additional $100-200 per square foot, depending on what finishes the buyer had wanted.

New plans for the two vacant lots are underway.

Schumm, who owns the lots, said he had a meeting with the project’s architect on Wednesday. He said right now the plan is to pursue a three-story building without underground parking. He said that the plan is to have commercial space on the ground floor, “high-tech” office space on the second floor, and either additional office space or a residence for his family on the third floor. Schumm said if the project goes forward, he most likely will apply for incentives again.