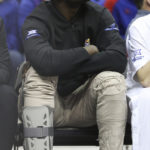 Injured center Udoka Azubuike watches from the bench during the second half on Saturday, Dec. 8, 2018 at Sprint Center.

There is no change in junior center Udoka Azubuike’s status for this weekend’s 11 a.m. Saturday showdown with Villanova at Allen Fieldhouse, but Kansas basketball coach Bill Self provided an update on the big man’s injured ankle during “Hawk Talk” on Tuesday night.

“I think he can put some (weight) on it. The swelling is still there, but it’s gone down a tremendous amount,” said Self of Azubuike’s right ankle. “He can walk on it in limited capacity and things like that, but part of the rehab process is to walk on it.”

Azubuike, who was seen wearing a walking boot and moving with the assistance of crutches at Sprint Center last Saturday night, continues to rehab the ankle with the hope of returning to action by the start of Big 12 Conference play on Jan. 2 vs. Oklahoma at Allen Fieldhouse.

“He’s really sore,” Self emphasized. “He has to fight through some things. Hopefully, if he has a great physical therapy or rehab-type sessions, then (he may) come back a week earlier. But it’s not going to be one (where), just because you try hard, he’s going to come back. He’s trying right now, but is a ways away before we can get into serious rehab because he’s reluctant to put pressure on it.”

Although Azubuike is still hurting, Self reiterated that the ankle was structurally sound and that the recovery plan remains to give Azubuike as much time as necessary to get the ankle to where he can come back at 100 percent.

That’s not just for game day either.

“When I say 100 percent, I’m talking about conditioning and rhythm and that kind of stuff,” Self added. “We are probably looking to the first of the year before that can probably happen.”