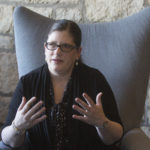 A scholar whose academic work led to legal change for victims of sexual and domestic violence in Indian Country will return to the University of Kansas, her alma mater, as a professor. Starting this fall, Sarah Deer will join KU’s department of women, gender and sexuality studies and the School of Public Affairs and Administration, KU announced this week.

“I have dedicated my career to making the law work for victims of crime,” Deer said, in KU’s news release. “My scholarship investigates ways to improve government policies to address violence against Native women. I am excited to work with my new colleagues in these two academic units to develop ways to better architect government services so that they address the needs of all members of our community.”

Deer is a Wichita native and member of the Muscogee (Creek) Nation of Oklahoma. She got her undergraduate degree in women’s studies and philosophy in 1995 and her law degree in 1999 from KU.

I interviewed Deer in early 2015, when she gave a lecture at KU, and she said she was most proud of how her research and advocacy work was able to help American Indian women — against whom violence was perpetuated because laws and a lack of resources hamstrung tribal courts from effectively prosecuting offenders.

A quote from that interview: “Anytime there’s a law and it’s wrong, you have to change the law.”

Deer’s work is considered instrumental in passing the Tribal Law and Order Act of 2010 and the reauthorization of the Violence Against Women Act in 2013. In 2014, she was named a national MacArthur Fellow. (Known as MacArthur “Genius Grants,” the awards recognize creative people with record of achievement and potential for significant future contributions, according to the Foundation. Winners receive no-strings-attached stipends of $625,000, paid over five years, which the Foundation says gives them freedom to “follow their own creative visions.”)

Deer apparently has not quit her day job in pursuit of such a vision.

She remains a professor at Mitchell Hamline School of Law, for now. She spent fall 2016 at KU as the university’s Langston Hughes Visiting Professor. According to KU, she recently published a book titled “The Beginning and End of Rape: Confronting Sexual Violence in Native America.” Her next book project will feature the writings of young Native women who are working on social justice issues. Down the road, she plans to publish a book on indigenous feminist legal theory in American law.

“Sarah Deer is an exceptional scholar who brings an abundance of knowledge and experience in a critical area of research,” Carl Lejuez, dean of KU’s College of Liberal Arts and Sciences, said in KU’s news release. “The possibilities for collaboration with colleagues and student researchers are exciting.”

Deer’s husband, Neal Axton, also a KU alumnus, also will join the KU faculty as a graduate engagement and government information librarian with KU Libraries, according to KU.