At age 8, Sarah Deer read in a children’s history magazine that women in America didn’t have the right to vote until 1920.

Upon verifying that it, in fact, was not, Deer said her thoughts turned to, “that’s not right.”

And thus began Deer’s lifetime of work advocating for women, which recently landed the Kansas University graduate on the prestigious list of 2014 national MacArthur Fellows.

Deer — whose research has led to changes in tribal and federal law to help protect women in Indian Country from violent crime — was the featured speaker at this year’s KU February Sisters lecture on Thursday and also talked to the Journal-World about her KU roots and ongoing work.

Deer is a Wichita native and member of the Muscogee (Creek) Nation of Oklahoma. She earned a bachelor’s degree in women’s studies and philosophy from KU in 1995 and a juris doctor from the KU School of Law in 1999. She currently is a professor at the William Mitchell College of Law in St. Paul, Minn.

Deer advocated for abortion rights during high school and was heavily involved in related events at KU, where she also volunteered helping victims of sexual assault, she said. Her focus zoomed in on American Indian women after she took her first tribal law class at KU. 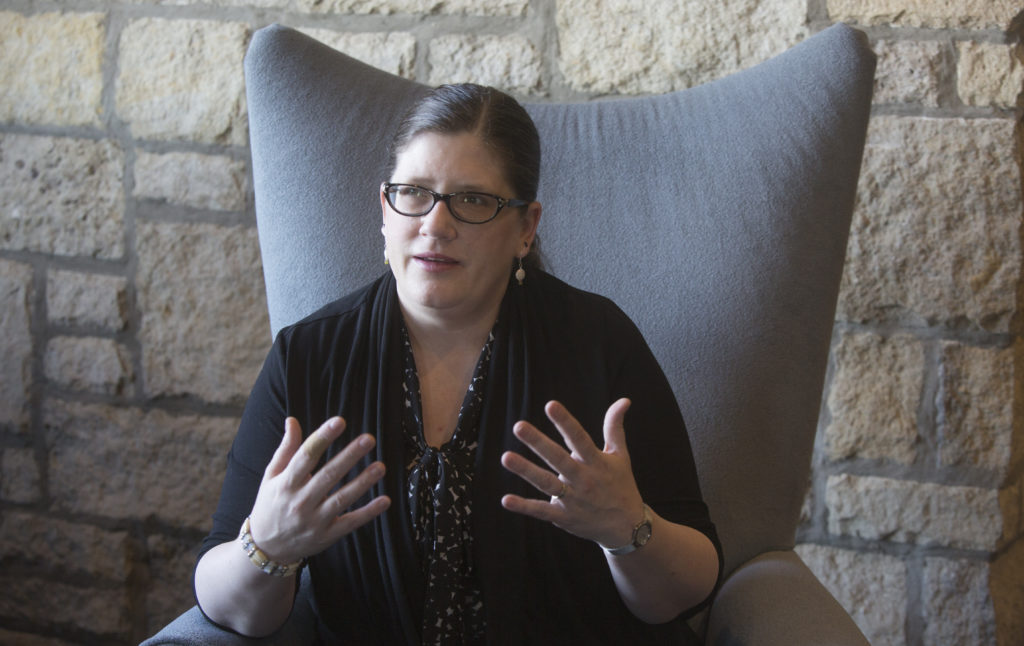 “There was a huge connection for me with the oppression of women and the oppression of tribes,” Deer said. The plight of women on reservations, a high percentage of whom are victims of sexual and domestic violence, particularly troubled her.

Deer’s MacArthur Fellow profile lays out why: “Native women living on reservations suffer one of the highest per capita rates of violent crime in the world, but because of limited jurisdictional powers, a lack of resources and limitations on sentencing authority, tribal courts are often unable to prosecute these crimes, and federal prosecutors decline to take up more than half of the cases that fall under their authority.”

Deer began to consider the problem the way her mother explained to her as a child how women — finally — earned the right to vote.

“Anytime there’s a law and it’s wrong,” Deer said, “you have to change the law.”

Research and advocacy work leading to that is what Deer is most proud of, she said.

She spearheaded a 2007 Amnesty International report titled “Maze of Injustice,” in which she reframed the problem of sexual violence in Indian Country as an international human rights issue. The report “immediately hit Capitol Hill hard,” she said, and led to the passage of two landmark pieces of legislation.

The Tribal Law and Order Act of 2010 increased the sentencing authority of tribal courts, which helps women by allowing the courts to imprison their abusers up to nine years instead of just one, as before, Deer said.

The 2013 reauthorization of the Violence Against Women Act enables tribal courts, which previously could only prosecute Indians, to prosecute non-Indians accused of domestic violence, she said. Non-Indians abuse women on reservations, she said, but federal courts rarely prosecute those men even though they could.

The MacArthur Foundation named its latest class of MacArthur Fellows in September. The so-called “Genius Grants,” according to the Foundation, recognize “exceptionally creative” people with a record of achievement and potential for significant future contributions.

This year’s 21 Fellows each will receive no-strings-attached stipends of $625,000, paid out over five years, which the Foundation says gives them freedom to “follow their own creative visions.”

Deer said she is working on a book due out next year and hopes to research more specifically her own tribe. She’s trying to learn the tribal language and hopes to delve deeper into how the Muscogee (Creek) have traditionally responded to violence against women.