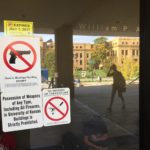 Elected representatives of faculty, staff and students at the University of Kansas are now formally on the record opposing campus carry. KU’s full University Senate this month approved a resolution, first crafted by the University Senate executive committee, stating that the body opposes “in the strongest possible terms” allowing concealed weapons on the KU campus.

State university campuses currently prohibit guns, but Kansas law requires them to allow lawful concealed carry beginning July 1, 2017. KU and the other universities have been prepping for that date by crafting policies for implementing the new concealed carry law. The Kansas Board of Regents is expected to approve draft policies from KU and the other schools on Wednesday.

Understanding that at this point the Board of Regents and individual universities are not in charge of the law but rather drafting policies to comply with a law that others made, the University Senate’s statement directly addresses the state Legislature. It says:

The University Senate of the
University of Kansas is composed of
the elected representatives of staff,
students and faculty at the University
and is charged with acting in behalf
of the staff, students, and faculty.

Eighty-two percent of the KU staff,
students, and faculty who participated
in the [January 2016 Docking Institute
survey][3] expressed opposition to
allowing concealed weapons on campus.

Moreover, current research indicates
that the net effect of campus carry on
the safety of college students,
faculty, and staff is likely to be
more death, more nonfatal gunshot
wounds, and more threats with a
firearm that are traumatizing to
victims.

Therefore, the University Senate
wishes to express its opposition, in
the strongest possible terms, to
allowing concealed weapons on the
University of Kansas campus.

On behalf of our constituencies, we
urge the Kansas State Legislature (1.)
to respect local control by continuing
the exemption to the Personal and
Family Protection Act and (2.) to
allow our campus communities to choose
whether or not weapons are allowed on
our KU campuses.

In true academic fashion, faculty members from the six state universities are already discussing possibilities for studying effects of the law — whether they want it to become reality or not.

The Regents Council of Faculty Senate Presidents is working on a survey to measure university faculty, staff and students’ anxiety about campus carry, according to a report at last month’s Board of Regents meeting. The idea is to establish a baseline by surveying people before implementation and then again after implementation. The group is also checking with other U.S. campuses with similar laws to see what data they collected before and after implementation.

*
I’m the Journal-World’s KU and higher ed reporter. See all the newspaper’s KU coverage here. Reach me by email at sshepherd@ljworld.com, by phone at 832-7187, on Twitter @saramarieshep or via Facebook at Facebook.com/SaraShepherdNews.