Taking a Neanderthal out to coffee 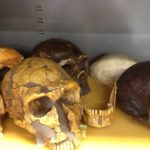 A recent story about de-extinction — i.e., reviving extinct species through biotechnology — brought out the mad scientist in me. We’re talking Dr. Frankenstein mad. Dr. Moreau mad. I stopped reading “Jurassic Park” as a cautionary tale and instead saw it as a fairy tale, a sadly impossible one.

Bringing back dinosaurs almost certainly won’t happen. DNA breaks down with time, and it breaks down more the longer its former host has been dead. Dinosaur DNA is far too degraded to whip back into shape with genetic wizardry and synthetic DNA. Yet bringing back creatures that went extinct hundreds or thousands of years ago is being talked about. And that gave me an idea.

I’ve read about the scientific pursuit of the Neanderthal genome. We are now closer to mapping it than we ever thought possible. So I wondered: What if one day we could bring back Neanderthals? Aside from paying to watch a Neanderthal fight a saber tooth tiger in some sort of Ice Age gladiator game (I have the business model if you have the venture capital), I wondered what we could learn about Neanderthals, and maybe humans too, if we were to bring one back.

So I went to chat with one of KU’s resident Neanderthal experts, anthropology professor David Frayer. In May, Frayer wrote about the similarities, genetic and cultural, between humans and Neanderthals for an op-ed in the New York Times. From comparing the Neanderthal genome and the human genome, scientists now think that humans have derived 4 percent and maybe more of their genes from Neanderthals. Meaning: Humans and Neanderthals interbred at some point. And among the shared genetic traits there are capacities for language and cultural production.

“If you bring a Neanderthal back to life, most of their adaptation is not genetic but cultural. So Neanderthals are going to learn modern culture,” Frayer said. “My guess if you gave a Neanderthal stone tools to use, he’d say, ‘Forget that, I want to use your laptop.”

Resurrecting a Neanderthal could tell us about their metabolism, their capacity for language and problem solving, as well as their — let’s be delicate here — romantic compatibility with humans.

It could also be a legal and ethical nightmare. If Neanderthals are human, is it OK to bring them back for our scientific curiosity? And would they be humans in the eyes of the law? KU law professor Andrew Torrance suggested the answer to that might not be all that clear. The closest thing to a legal definition of humans that we have comes from Roe vs. Wade, Torrance said.

“That’s among the most controversial subjects in all of law,” he said. “You can imagine coming to answers that everyone in society can agree to will be nearly impossible.”

Some of the most interesting aspects of Neanderthal life, as it was lived tens of thousands of years ago, would still remain unknown even if we could bring them back. Their culture, their language, their mythology, their religious philosophy, their worldview would all still be lost to us (making Encino Man another sad and impossible fable).

“He or she isn’t going to come out speaking the Neanderthal language,” Frayer said. “They’re going to speak the language that the Germans or the Russians or the Kansans that raised him. They’re not going to talk about Neanderthal past.”

For that, you have to look not at DNA but at the archeological record: bones, skulls, tools, toothpicks — the stuff that Frayer has spent his career studying. But that doesn’t mean Frayer wouldn’t be interested in meeting one.

“I’d take him to the Bourgeois Pig to have a coffee and talk to my friends,” he said.

It might sound fantastical, but we know modern humans and Neanderthals shared a world and fraternized thousands of years ago. The lived past might be even more fantastical than a hypothetical sci-fi future.