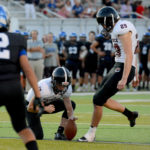 After practice, members of the Lawrence High football team headed straight to the soccer field at LHS.

Lawrence players then cheered on senior goalkeeper Ross Brungardt from the sideline. Brungardt, who is also a kicker and punter for the football team, recorded multiple saves en route to a clean sheet during a 2-0 win over Free State High School Wednesday.

It was a significant moment for Brungardt, who has experienced his fair share of City Showdowns during his four-year career.

“It feels amazing,” Brungardt said. “I think this is my second time beating Free State ever. It feels really nice.”

Brungardt has played both sports during the fall throughout his career, and has become used to the daily grind of competing for the two programs. 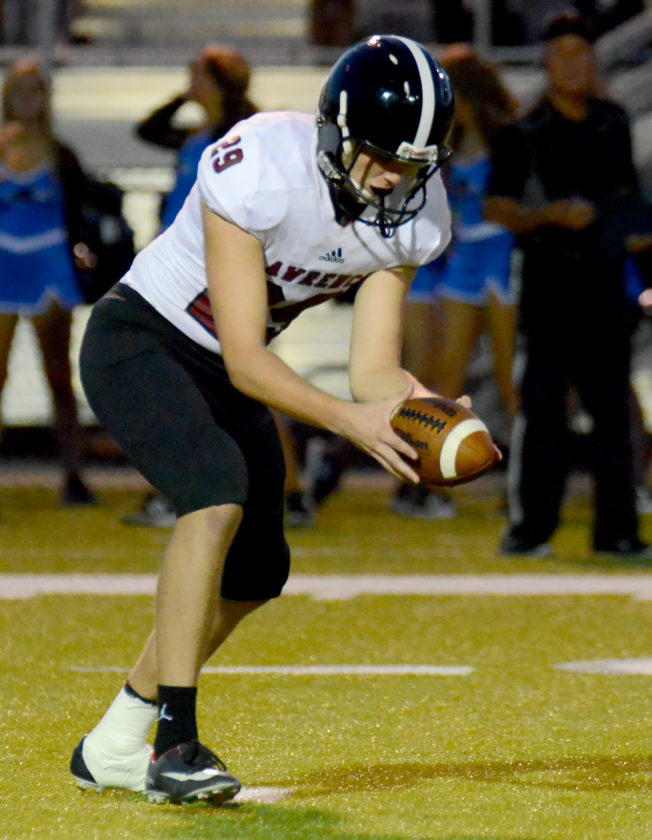 Soccer matches typically take place on Tuesday and Thursday, while football games usually occur Friday. As a result, Brungardt will practice for one hour with the football team on the other two days of the week before heading to soccer practice for two hours.

It hasn’t been the easiest schedule, but one Brungardt has always known.

“It gets busy with school work,” Brungardt said. “I’ve been doing this for a long time, so I’m just used to it.”

But Brungardt has been a key player for both teams this fall.

On the soccer field, Brungardt has been the team’s starting goalkeeper in 10 matches and claimed 92 saves. Entering Thursday, Brungardt allowed 21 goals in 840 minutes for a Lawrence team that is 6-5-2.

Meanwhile, as a football player, Brungardt has been effective as both a punter and kicker. Brungardt has drilled nine of his 10 point-after-touchdown attempts this year for LHS (1-5), while netting a pair of field goals, as well.

Brungardt hit a 35-yard field goal against Olathe South in the season opener, and made a 20-yard field goal. Yet it’s his punting that has been the biggest weapon during his first season as the team’s punter.

“I’ve had a pretty good season so far,” Brungardt said. “I went to a K-State kicking camp and punted there. I told my coach about it, and from there, I just started punting.”

Brungardt’s kicking prowess should come as no surprise given his family background. His older brother, Cole, is a redshirt freshman kicker for the University of Kansas after a successful career with LHS.

Ross Brungardt would like to continue to follow in his brother’s footsteps, pursuing sports at the collegiate level.

“My brother has been a terrific role model to me and I could not be where I am today without him,” Brungardt said. “I’m open to football or soccer, but I’d really love to punt in college.”

Free State senior linebacker Jalen Nash just seems to have a nose for the ball.

The Firebirds (6-0) have a loaded defense, particularly with their front seven, and have demonstrated that every week. Yet Nash is the team’s leading tackler, as he is consistently making plays all over the field every single game.

“Jalen is our leading tackler and our leading point guy on defense,” FSHS head coach Bob Lisher said. “He’s always out there making plays, and does what he needs to do. We count on him being a leader out there and he does that.” 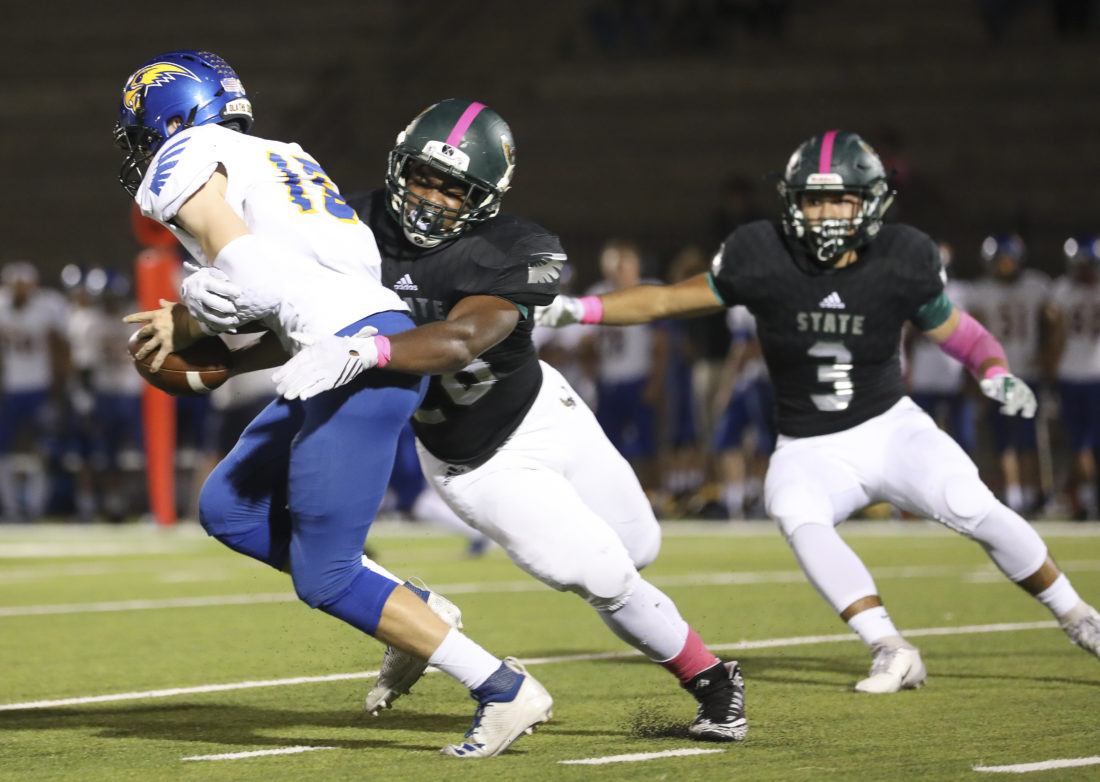 Nash, as well as the rest of the Free State defense, will certainly have its toughest test of the season when it travels to Shawnee Mission East (5-1) for the final road game of the regular season.

Both teams are ranked in the top five in Class 6A, according to the latest poll by Kpreps. FSHS is ranked No. 2, while Shawnee Mission East is listed at No. 5.

“They are 5-1 for a reason,” Lisher said. “They know how to play football. They have weapons on both sides and speed on both sides. We are going to have our hands full.”

The Lancers have a strong rushing attack, scoring at least 35 points in all but one game.

But Nash appears up for the challenge, as has been the case throughout his career. Nash has made an impact on the varsity team for the past three seasons. He’s served as a running back and contributed to special teams before focusing on the defensive side of the ball the past two years.

Nash has been playing football since the second grade along with a majority of his current teammates.

As a result, Nash is determined to keep playing the sport he loves after this year.

“I want to go to college and play football,” Nash said. “I just need to keep grinding and make sure I get better everyday.”

This clash of area teams should feature a lot of running plays.

Baldwin (2-4) will look to rebound following consecutive losses, in which the team has scored a combined nine points. Tonganoxie (4-2) is on a four-game winning streak, averaging 26 points per game over the last four weeks.

Senior running back Korbin Riedel is leading the Chieftains with 140 carries for 757 yards and nine touchdowns. As a team, THS has racked up 1,165 rushing yards on 250 attempts through six weeks.

First-year head coach Sean Hayden netted his first victory last week, as Eudora (1-5) took down Ottawa by a 26-7 margin in a road tilt.

Last week, Carter Neis had 150 rushing yards and Gavin Elston added 115 yards on the ground. Matt Evans recorded an interception on defense, while Noah Watkins had his 100-yard interception return for a score negated by a penalty. Ottawa’s lone score came on a kickoff return.

Paola (6-0) has allowed a total of 25 points this season, recording four shutouts through six games.

Perry-Lecompton (5-1) will face another tough test this week.

The Kaws, who are ranked No. 5 in Class 3A, have only lost to defending 3A champion Sabetha this season. Hayden, however, enters the matchup with a 4-2 record following a three-game win streak.

Both programs recorded a pair of wins over the same two opponents. Both teams beat Santa Fe Trail by a 28-6 margin, while Perry-Lecompton claimed a 24-13 win over Jefferson West compared to Hayden’s 30-7 victory over the same foe.

Veritas (1-5) will look to bounce back this week from a 54-22 home defeat to Sunrise Christian Academy.

Andrew Windheuser scored twice for the Eagles, while Will Eagleman added one score in the defeat. Cair Paravel (2-3) dropped a 58-42 decision to Sunrise Christian Academy earlier in the season, and has suffered consecutive losses.