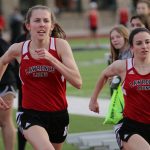 LHS seniors Evann Seratte (left) and Hannah Stewart (right) race neck and neck in the final stretch of the 800-meter run during a meet at Free State High School on March 22, 2019.

For the first meet of the season, it’s only natural for the pool of nearly 300 athletes from Lawrence High, Free State, Shawnee Heights and Bishop Seabury to look at an event result with a grain of salt.

Unless you’re the defending 6A girls state champions, Lawrence High.

After pacing her way through her first four bar heights, Lawrence senior Josie Hickerson was inches away from clearing 11-foot-7 in the pole vault, which would have been a school record. In the shot put, seniors Chisom Ajekwu and Krissy Howard also neared their state marks of 38 feet, 2.5 inches and 36 feet, 6 inches, respectively.

“We’re just in practice mode,” LHS coach Jack Hood said. “Just keep trying and get better every week. It’s not where we are now, it’s how we finish in late May.”

A young boys long jump crew excelled led by freshman Avion Nelson who won the even with a mark of 19-foot-3. Chris McGee and Ntense Obono also had strong performances.

Fresh off a state runner-up finish in cross country, the Firebirds’ distance runners had the two fastest times of the boys 1,600-meter run. Brock Cordova won with a time of 4:47, the only sub-five-minute time. Dash Spears finished second running 5:00 flat and Grant Holmes ran 5:18 behind LHS’s Jack Ryan and Cole Shupert.

Erin Fagan led the Firebird girls in the mile with a time of 5:48, Delaney Rockers ran a time of 5:58 in that same event as well. Middle distance runners Janice Werth, Allison Babbit, Ella Marshall, Corinne Scales and Maddie Day each also ran strong times in the 800-meter dash.

Laila Robinson won the high jump with a mark of 5 feet, 2 inches to lead the Firebirds in that event.

“I thought that was awesome that they were able to kind of get out there with only a couple of real practices for those events,” Rose said of her technical groups such as the high jump and pole vault.

Free State also had a strong showing in discus, where Kala Ewing won with a throw of 97 feet, 6 inches.

Bishop Seabury runners Henry Nelson and Harrison Hartzler made an impression in their events in more ways than one.

“We definitely get looked at different,” Hartzler said of standing out in a blue uniform, as all of the other school colors were red or green. “We stick out like a sore thumb.”

The uniform difference only made it easier to see how much the two dominated each of their races.

Hartzler won his heat of the 400 convincingly and placed fourth overall. Nelson finished first overall in the 3,200-meter run with a time of 10:17.