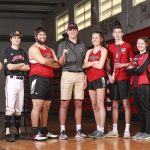 During the spring campaign last year, LHS came away with a state title on the final day of the spring slate when the girls track and field team secured first place at the 6A state meet at Wichita State University.

The baseball team already started the 2019 spring season with a 9-0 win over Wichita Northwest, and the Lions will look to keep things rolling as plenty of other sports get underway this week.

Here is a look at what all of the Lions’ programs expect out of the upcoming year:

The Lions bring back plenty of bats from last year’s team that went 8-13 and fell in the regional semifinals. The team graduated 10 seniors, and will have to replace 90 percent of its pitching production from 2018.

“We like where we are defensively and our offensive potential,” said 14th-year head coach Brad Stoll. “We will need some dudes to step up on the mound in order for us to have success.”

Lawrence (1-0) will take on Southmoore at 4 p.m. Friday at Deer Creek High School.

Steve Seratte will begin his first year as the LHS softball coach, though he’s already coached nine years at the high school level.

Lawrence lost five starters from last year’s team that went 11-10 before falling in the regional semifinals. The Lions also bring back five starters, including three seniors in Angelina Harjo, Abby Monroe and Sammy Williams. Juniors Karly Johnson and Kate Williams are also back for another year. Seniors Kaylee McNish, Jesse Cox and Victoria Droge will make the jump to the varsity level.

“We will strive to compete with all of the teams in the Sunflower League with our heart and hustle, even though we may be lacking in experience at the varsity level,” Seratte said.

The girls track team has a strong chance of repeating as state champions.

“We have a great class of returning athletes that will provide us with strong leadership,” head coach Jack Hood said. “We are also very excited about our newcomers. We feel like several of them will help make us better right away.”

Lawrence will compete against Shawnee Heights and Free State at 3 p.m. Friday at FSHS.

The girls soccer team will have a different look this year after graduating seven seniors from last year’s team that went 4-10-3.

At the same time, the Lions have a good group of returners to help ease the transition for fourth-year coach Matthew McCune. Senior Anna Chieu is the team’s leading scorer, while seniors Leslie Ostronic and Banner Williams will anchor the defense. Sophomores Piper Lietch, Riley Unekis, I’yawa Brewer, Regan Turpin and Marley Sears will embrace larger roles this year.

“We have the right amount of experience and skill returning in key positions and areas on the field,” McCune said.

LHS will travel to Topeka at 6 p.m. Friday.

The Lions will look to build off a strong showing from last year after claiming runner-up at the Sunflower League meet and notching fourth at the state meet.

“Our main focus right now is getting the swimmers in better swimming shape and learning the different strokes,” said Kent McDonald, who is in his 13th season as the head coach. “The divers are working on learning new dives and improving the ones they already can do.”

Lawrence will compete at the Emporia Invitational at 4 p.m. Thursday.

Weather has made things difficult for the LHS boys tennis team to start the season.

The Lions have 38 players out this year, but have not been outside much to see how the new players will do. Senior Cooper Wright and junior Kanak Masten netted ninth at the state meet last year as a doubles team. Senior Ryan Logan and sophomore Drew Dean are also key returners.

“Due to the cold, wet spring, we have a long way to go and a short time to get there,” said Chris Marshall, who is in his 10th season. “It will be up to our seniors and returning players to lead a constructive practice to get us ready for the season and our first matches.”

Head coach Steve Rampy has just one returning golfer in his first year with the program.

Senior Ross Brungardt, who also played football for Rampy in the fall, is the veteran after qualifying for the state meet last year. Rampy hopes his team continues to grow this spring and makes improvements this season.

“The team will be young, as we are hoping to increase the number of golfers this year,” Rampy said.

Lawrence will compete in a meet at 1 p.m. Monday at Lake Quivira Country Club.