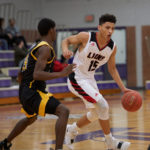 Midseason basketball tournament week is one of my favorite times of the year.

It is a chance to see a ton of basketball, and watch squads grow in the process. This past week was no different, as a number of area teams were in action during their respective midseason basketball tournaments.

In addition, multiple teams earned some sort of hardware during a taxing week. Here is a look at some of my takeaways from the area hoops scene following a successful tournament week.

Lions are the real deal

The Lions were never in trouble in their three games, despite facing a pair of ranked teams.

Lawrence (No. 3 in 6A) was up by 30 in the fourth quarter on Wichita Southeast (No. 2 in 6A) in the semifinals before head coach Mike Lewis elected to put reserves in with about three minutes remaining. LHS then never trailed, notching a double-digit win over Topeka High (No. 8 in 6A) in the championship game.

LHS is loaded this year, and it has shown during the team’s nine-game win streak. Seniors Trey Quartlebaum and Clarence King, along with sophomore Zeke Mayo, can score in bunches in a variety of ways. They can blow by defenders off the dribble or stretch an opposing defense with the long ball.

Seniors Brett Chapple and Eric Galbreath, who are also in the starting lineup, do a bunch of the dirty work inside to help keep this offensive machine churning. Juniors Mayson Quartlebaum and Willie Dotson are dynamic playmakers off the bench. Junior Bryce Johnson and senior Bryant Graham provide an impact when on the floor, as well.

Two-time defending state champ Blue Valley Northwest remains the team to beat in 6A, but LHS is proving that it could make a deep run this postseason.

Title proves PLHS can do some damage this year

The Kaws have been on an incredible run as of late, including winning a title in the Oskaloosa tournament.

Perry-Lecompton started things off with a 66-35 win over Jefferson County North in the opening round. PLHS followed that up with a 65-34 victory over Rossville in the semifinals, and then closed the tournament off with a 61-51 win over Cornerstone in the championship game.

Seniors Connor Anderson and Colton Mallonee, along with junior Blake Farmer, were named to the all-tournament team for their prolific play this past week. All three players are averaging double figures during the team’s 11-2 start to the season.

Following the three-game sweep, the Kaws have now won nine games in a row. All nine contests have been decided by double digits, including a 54-42 victory over Sabetha (No. 6 in 3A) on Jan. 11.

It is time to take notice of the Perry-Lecompton boys basketball team.

The Eudora boys basketball team suffered a 54-33 loss to Bonner Springs during the championship game of the Tonganoxie Invitational.

But the Cardinals made it to the championship game thanks to the play of Rock Jerome and Jayden Pierce, who earned all-tournament honors. The duo led EHS to a 61-53 win over Wamego and a 61-59 victory over Olathe West in the first two games.

Of its four losses in 2019, Eudora has been handed three defeats by Bonner Springs. Still, the Cardinals have shown promise and are capable of scoring on most teams with their excellent execution in transition.

Eudora’s girls basketball team, meanwhile, finished fifth in the Tonganoxie tournament. After losing in the opening round, EHS responded with a 64-45 win over Metro Academy and then netted a 54-32 victory over Sumner Academy in the fifth-place game. Reagan Hiebert and Riley Hiebert were recognized on the all-tournament team.

In that same event, the Tonganoxie boys basketball team placed fourth and the girls basketball squad finished eighth out of eight teams. The THS boys defeated Metro Academy by a 56-47 margin in the opening round before falling to Bonner Springs (46-33) in the semifinals and Olathe West (59-36) in the third-place game.

By now, it is no secret that the identity of the FSHS boys basketball team is on the defensive end.

The Firebirds (8-2, No. 6 in 6A) demonstrated that during a loaded McPherson Invitational in the Roundhouse. Free State held all three opponents to 50 points or fewer en route to a third-place finish in the tournament.

In the third-place game, FSHS posted its best defensive performance by holding Shawnee Heights to a season-low 30 points. The Thunderbirds’ previous lowest point total on the year was 47. Mill Valley mustered just 44 points during Free State’s 61-44 win in the opening round.

Junior DK Middleton was named to the all-tournament team for his efforts on both ends of the floor. In the final game of the weekend, Middleton collected six of his team-high seven rebounds on the defensive end. He even recorded a block, as well.

The Bishop Seabury boys basketball team went up against some tough competition, coming away with a fourth-place finish in the Baldwin Invitational.

Bishop Seabury started the event off with a 75-61 win over Baldwin, which finished eighth, behind a 27-point showing from Stavian Jones. The Seahawks then suffered a 70-40 loss to Augusta in the semifinals before dropping a 64-52 decision to Anderson County in the third-place game.

Despite dropping the final two games, the Seahawks deserve a ton of credit for hanging with some tough competition. After being short-handed in all of the team’s action before winter break, Bishop Seabury is still coming together as a team.

Miles Branch has made an impact since making his debut in early January. Luke Hornberger and Zach Bloch continue to lead an offense that has the potential to be dangerous by the end of the year.