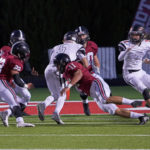 After giving Shawnee Mission Northwest the first score of the game, the Lawrence High football team bounced back with a dominant defensive effort in the first half, giving its offense a chance to take the lead after the half.

The Lions’ defense wasn’t able continue its dominance in the second half, falling 20-2 Friday night to the Cougars at LHS. Lawrence tallied 70 yards in penalties, creating four turnovers off a pair of fumbles and interceptions.

“I told the guys it was going to be a grind. It was never going to be an easy game, Northwest is too talented,” Lions coach Steve Rampy said. “We weren’t able to grind with them.”

In the first half, the Lions’ defensive front of Sam Bart, E.J. Jewsome and Eric Galbreath limited the Cougars to 11 yards on the ground on 18 carries.

Three goal line stops late in the first quarter to bring up fourth and 3 forced Northwest to pass, and the Cougars got on the board first with a 3-yard touchdown pass to Justin Mitchell. Lawrence blocked the extra point, the second time it had done so this season.

Kicker Ross Brungardt took advantage of a wind-aided field in the second quarter. On a fourth-and-long situation, Brungardt sent a 75-yard punt inside to the Cougars’ 10-yard line. Later in the quarter, he sent a ball into the endzone for a touchback, which ultimately led up to a Lions safety.

Galbreath sacked Cougar quarterback Ty Black on third down, which prompted a wild snap for the punt that rolled into the Lions’ end zone, trimming the deficit to four points.

“Our goal as a defense is to not only stop them, but to do the best we can to give the offense the best look; even if that’s scoring we’ll do that however we can,” Galbreath said.

Deshon Lewis and Bart each recovered a fumble with brothers Caleb and Cole Mondi forcing fumbles. Safety Payton Cummins snagged an interception in the second quarter and saved a touchdown by not blowing any deep coverage the entire night.

Bart’s fumble recovery to end the third quarter gave the Lions the ball in Cougar territory with a chance of putting the game within one score. However, Rampy elected to not kick a field goal on the ensuing possession after Brungardt sent one wide left earlier in the night.

Against a pass heavy team, Lawrence allowed Northwest’s Ty Lindenman to rush for 75 yards in the second half, with a pair of long carries that led up to the Cougars two touchdowns. Lindeman also finished as the Cougars leading receiver with 42 yards on four catches.

In his third start sophomore quarterback Tre’ Jackson was sacked 10 times on the night, seven in the second half alone. Jackson completed 5 of 8 second half passes for 51 yards.

Sophomore running back Devin Neal, who missed last week with a concussion, rushed for 50 yards on 13 carries.

“He had a deer-in-the-headlights look,” Rampy said. “He looked a little more like a sophomore than he has. Like I told the kids, everything is a learning experience. It’s not the end of all ends, we can’t look at it like that.”