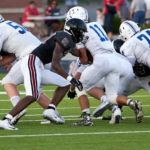 Lawrence High’s Eric Galbreath (81) wraps up Gardner Edgerton’s Jacob Hunsperger (11) for the tackle in the first half Friday, Sept. 14, 2018, at Lawrence High School.

The 6-foot-7, 213-pound defensive end has towered over every offensive line he’s faced during his final season. Galbreath has been vital in slowing down opposing run games for the Lions, who have started the year with an 0-3 record.

“I think he’s got a great future in football if he wants it,” head coach Steve Rampy said. “He’s ultra-intelligent. If he really wants to devote the next four or five years of his life to football, I think he’s going to be really special.”

But Galbreath hasn’t always been a football player, even though his dad, Eric Galbreath, was a fullback for the University of Kansas football team between 1993-96.

Due to his stature, Galbreath spent most of his childhood playing basketball. That was the sport Galbreath originally fell in love with, as he has dominated the paint at any level. In fact, Galbreath didn’t give football a try until he was in eighth grade.

Since then, Galbreath has made massive strides as a football player and actually would like to pursue that at the collegiate level.

“I was told in eighth grade (I could play college football) and I didn’t see it at all,” Galbreath said. “I saw sticking to basketball. When I came out here, and did well my sophomore year, I saw a future in football.”

The biggest key for Galbreath this season has been staying on the football field.

Galbreath had dealt with numerous injuries, which have prevented him from finding any rhythm as a football player. In his sophomore season, Galbreath broke his hand and dislocated his shoulder. Galbreath also tore his AC joint and sustained a concussion last year.

As a result, Galbreath spent this past offseason adding on weight by getting stronger in the weight room. It made things difficult for his basketball background, however.

“In the offseason, I went to a lot of camps and worked with coaches,” Galbreath said. “In the summer, it’s hard to lift hard and then do basketball stuff and still gain weight. Sometimes you have to pick and choose one.”

Still, Galbreath’s dedication in the offseason has proved to be beneficial this fall.

Galbreath is consistently making plays on a weekly basis, while bringing that same effort during practice. Galbreath’s knowledge of the game has improved, as well, as he’s able to understand defensive schemes.

Yet Galbreath, who is one of six captains for Lawrence, still believes he can continue to improve throughout his final campaign.

“I’ve been struggling with keeping the same aggressive mindset that I have,” Galbreath said. “Sometimes, I can let little things interfere with how hard I play.”