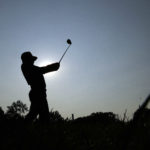 Gary Woodland tees off on the 18th hole during the third round of the PGA Championship golf tournament at Bellerive Country Club, Saturday, Aug. 11, 2018, in St. Louis. (AP Photo/Charlie Riedel)

Continuing his strong late-season play, former University of Kansas golfer Gary Woodland became one of the 30 players to advance to the Tour Championship, set for Sept. 20-23 at East Lake Golf Club in Atlanta.

Woodland earned a spot in the field by finishing in a tie for 12th at the BMW Championship at Aronimink Golf Club in Newtown Square, Penn. Woodland strung together four consecutive low rounds to move into 28th in the FedEx Cup standings.

He shot 66-66-66-67 for a 15-under total to tie with Kevin Na and Justin Thomas, five strokes behind winner Keegan Bradley.

PGAtour.com lists what scenarios would have to take place for each of the 30 competitors to win the $10 million check that goes to the winner of the FedEx Cup playoffs.

A three-time winner on tour, Woodland would need to win the Tour Championship and:

No. 1 (Bryson DeChambeau) finishes in two-way tie for 26th or worse.

No. 2 (Justin Rose) finishes tied for eighth or worse.

No. 3 (Tony Finau) finishes in three-way tie for third or worse.

No. 4 (Dustin Johnson) finishes in a three-way tie for second or worse.

No. 5 (Justin Thomas) finishes in a three-way tie for second or worse.

No. 6 (Keegan Bradley) finishes tied for second or worse.