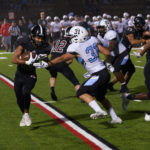 Lawrence sophomore quarterback Tre' Jackson (15) attempts to run past Shawnee Mission East Friday, Sept. 7, 2016 at Lawrence High School. The Lions dropped a 43-13 decision in their home opener, falling to 0-2 on the season.

The Lawrence High football team didn’t let a lopsided scoreboard keep it from battling hard all the way to the end of its home opener Friday night in a 43-13 loss to Shawnee Mission East.

Sophomore quarterback Tre’ Jackson ran 65 yards for a touchdown on the game’s final play, making him the Lions’ leading rusher with 84 yards and enabled LHS to outscore Shawnee Mission East in the second half, 13-12. The Lions trailed by 33 points at halftime.

“We’re down 43-7 and he has the heart to run a touchdown like that,” junior linebacker Cole Morris said. “That shows a lot of heart.”

With steady rain falling at LHS, it wasn’t a night of deep touchdown pass attempts and big plays through the air. A battle on the ground took place between sophomores Devin Neal and Auston Hollins of Lawrence and junior Tony Friends and senior Rashaun Burney of the Lancers.

“The game of football has and always will be won in the trenches,” head coach Steve Rampy said. “Our defensive line are all seniors and on the other side of the ball, they’re not. We’ve just got to find a way to get those guys more competitive, more physical, and we’ve just got to keep playing and we’ll get better by the end of the year.”

Lawrence senior quarterback Garrett Romero was sacked three times in the the first half. The Lions, who went three and out on their first three drives, recorded two first downs in in the first half, one of which came via a penalty.

However, with every challenge that a rainy game might bring, the Lions were able to capitalize on the Lancers miscues. A muffed punt return recovered by Deshon Lewis gave the Lions their first chance in the red zone of the game, stopping the Lancers on the following drive with an interception.

Andy Maddox, the son of Kansas basketball alumni Mike Maddox (1988-91), led the Lancer in the first half. They were able to score on their first five drives.

Lawrence started to turn things around offensively in the second half.

Flipping the field, kicker Ross Brungardt took advantage of the wind. His kickoff put the Lancers in their own half of the field for the first time on the kickoff to start the second half, and then again on the next on five drives with his punts.

With four first downs, Lawrence ran for 59 yards before Jackson’s game-ending run. To put the Lions on the board, Morris picked up a fumble by the Lancers’ Tony Friends, who exited shortly after with an injury.

“That’s what they do,” Rampy said. “It’s not just Cole, it’s a whole group of them, they swarm to the football and when one comes out, they’re on top of it.”

On the defensive front, the Lions’ defensive line of E.J. Jewsome, Sam Bart and Eric Galbreath were more effective by playing just defense. After offensive struggles in the season opener, Rampy decided to keep players on one side of the ball for much of the night.

Jackson, who normally plays corner for the Lions, saw some action on the offensive end late in the game with the score as lopsided as it was.

“[Jackson] is one of those guys we have to get the ball in his hands, he’s one of those kids who can go 65 yards,” Rampy said. “He’s explosive, and we know that.”