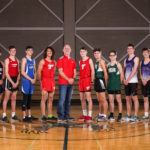 It was a season full of medals for this sensational junior. Nelson earned a medal in seven out of his eight races this season, which included five first-place finishes. Nelson placed first at regionals and third at the 2A state cross-country meet.

The Chieftains saved their best showing for the postseason under Tollefson. Tonganoxie took third at the 4A state meet behind a balanced attack. The Chieftains also won the Frontier League, and finished first in their regional meet.

Hudson Allen, Baldwin — Despite being just a sophomore, Allen posted a strong season to earn a selection. Allen finished 32nd at state, while placing 13th at the league meet and claiming ninth at regionals. His best time of the year was an 18:07.

Jacob Bailey, Baldwin — Bailey is the only area athlete to make two All-Area teams in the fall of 2018. Bailey, who is also a first-team soccer selection, capped off a remarkable cross-country career with a seventh-place finish at the 4A state meet. Bailey also finished third at league and regionals in his final season.

Jerratt Bradley, Eudora — Bradley finished 28th at state after qualifying as an individual. He also claimed 10th at the league meet.

Jakob Foley, Tonganoxie — As a first-team Frontier League selection, Foley played a big part in the team’s strong run through the postseason. Foley placed fifth at regionals, but his highest individual finish was a runner-up mark at the McLouth Invitational.

Charlie Johnson, Free State — Despite an injury, Johnson did enough to help the Firebirds claim a runner-up team finish at the 6A state meet. Johnson placed 19th at the state meet with a career-best time of 16:14.40. He also registered fifth at regionals, which was Free State’s lone team win.

Bobby Lounsbury, Eudora — The Eudora senior was the team’s top runner all season, running a personal-best time of 17:29. Lounsbury finished sixth at the Frontier League meet, which earned a first-team selection in the league.

Josh Mitts, Perry-Lecompton — A pair of top-10 finishes in the postseason was a nice way for Mitts to close out his senior campaign. He finished seventh at the Big 7 league meet and then took eighth at his regional meet.

Calvin Morgan, Tonganoxie — The Chieftains wouldn’t have been able to clinch third at the 4A state meet if it weren’t for Morgan, who earned a medal with a 17th-place finish. Morgan was also the Frontier League individual champion, and he placed fourth at regionals.

Jack Ryan, Lawrence High — Even though LHS did not qualify for state, Ryan was the team’s top runner for much of the season. Ryan netted multiple medals, including an 11th-place finish at Shawnee North Community Center.

Ben Shryock, Free State — Shryock put together one of the better rookie campaigns in program history. He finished fourth at the 6A state meet with a time of 16:04.90, while also placing fifth in the Sunflower League and claiming fourth in regionals.