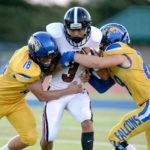 After forcing Olathe South into a three-and-out on the opening drive, LHS scored on its very first offensive play. Senior quarterback Garrett Romero handed the ball to sophomore running back Devin Neal, who cut outside and sprinted down the Lawrence sideline for a 58-yard touchdown run.

Despite scoring within the first two minutes of the 2018 season, the Lions struggled offensively during a 26-10 loss to the Falcons in the season opener Thursday night at Olathe District Activity Center.

“That was probably the kiss of death,” said Rampy, who is in his first year as the head coach for LHS. “All of a sudden, you have an inexperienced offense that goes, ‘Huh, that’s what this is about.’ It wasn’t what this was about. He made an incredible play.” 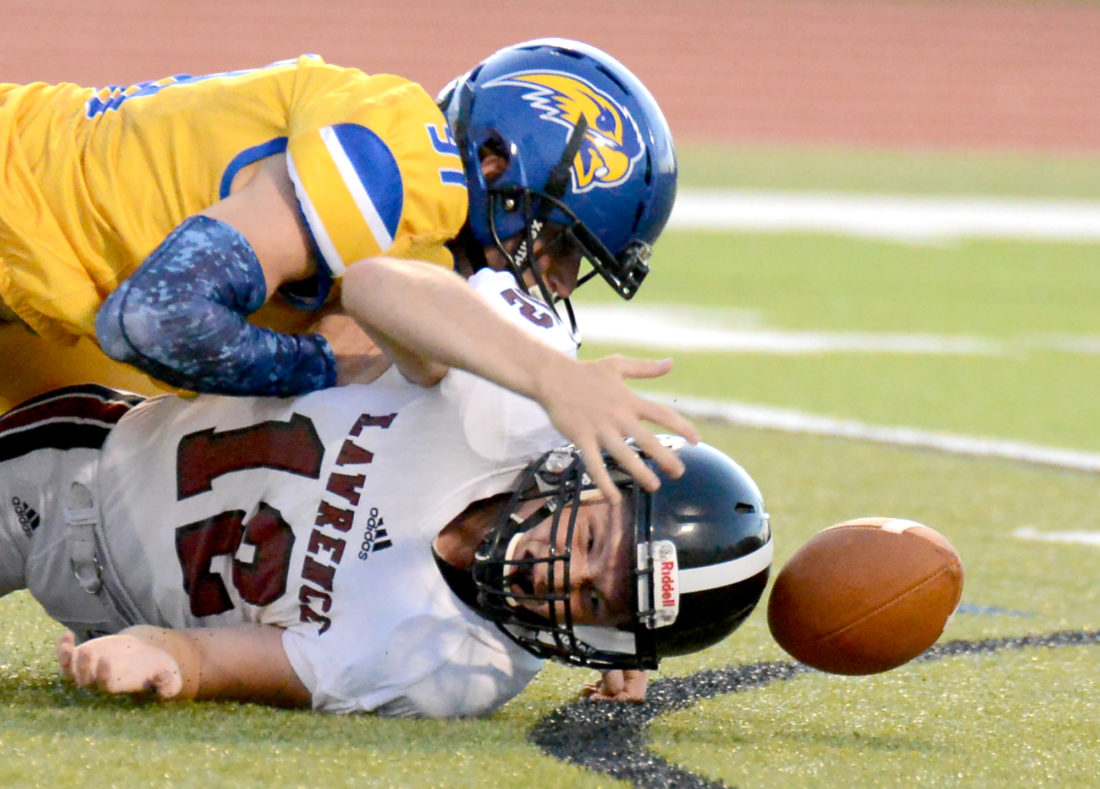 Following the early firepower, Lawrence’s offense was unable to move the ball for the rest of the night. The Lions (0-1) recorded just one first down in the first half, which came via a personal foul.

But the Falcons (1-0) weren’t able to do much either, turning the ball over on downs three different times in the first half.

Seniors E.J. Jewsome, Sam Bart and Eric Galbreath were a force on the defensive line throughout the game. Senior linebackers Colby Stumma and Caleb Mondi also chipped in on the team’s stout run defense. Olathe South managed just 75 rushing yards on 25 carries in the win.

“Last year, our defense was our weakness,” Jewsome said. “We always try to swarm to the ball. We never let a solo tackle happen, because you never know what could happen.”

As a result, the Falcons turned to the air attack and were able to find some success by doing so.

With 46 seconds left in the first half, Olathe South quarterback Evan Foster connected with Jai Haynes on a 46-yard touchdown pass to even the score at 7-7. The two teams then traded fumbles before the intermission, including a decisive fumble recovery by Stumma to prevent the opposition from taking the lead.

The Falcons ultimately took their first advantage at the 6:42 mark in the third quarter, as Foster linked up with A.J. Shields for a 17-yard touchdown pass. Shields then netted a second score on a 78-yard pass from Foster, giving Olathe South a 20-10 lead in the closing seconds of the third quarter.

“If we hadn’t worn our defense out, (Olathe South) wouldn’t have scored,” Rampy said.

The LHS offense spoiled a couple of opportune drives early in the second half.

With 5:15 left in the third quarter, Lawrence started on the opposition’s 15-yard line following a fumble by Olathe South. Senior Ross Brungardt eventually drilled a 35-yard field goal to trim the deficit to three points, though the Lions were poised to do more damage on that possession.

On the following drive, LHS started off in opposing territory and ended up punting. The Falcons then made sure to remove all doubt with a pair of late scores, including an 85-yard interception return in the final period.

Neal led the team with 68 rushing yards on nine attempts, while junior Austin Hollins added 10 yards on the ground. Romero went 10 of 22 for 123 yards and threw three interceptions.