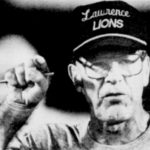 Jennifer Freeman, daughter of legendary Lawrence High football coach Bill Freeman, will be in Lawrence on Saturday signing copies of her new book “Heart of a Champion” from 1-3 p.m. in the LHS cafeteria.

Freeman’s book, which chronicles the life and lessons of her father, was released this year and is available on Amazon.com. She also will be selling copies of the book for $12 on Saturday.

Coach Freeman, who led the Lions from 1974-90 and won five state football titles and two state track titles during that time, died at age 84 in December of 2015 after a battle with Alzheimer’s disease.

Part of the reason Freeman decided to write the book was to bring greater awareness to the fight against Alzheimer’s, while also honoring and celebrating the life and legacy of her father.