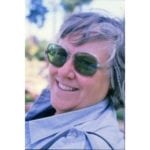 Private inurnment for Charlyn Hawkins Orel, 87, Lawrence, will be held at Pioneer Cemetery in Lawrence. Charlyn was born June 2, 1929, in Winnemucca, Nevada. Her maternal grandfather had run a stagecoach stop in the northern part of the state. Her mother, Frances Hawkins, was a proud member of the Daughters of the American Revolution and her father, Leslie O. Hawkins, served as a state judge before he joined a partnership with Pat McCarren, taking over after McCarren went to Washington. Charlyn attended Winnemucca’s Grammar School, as her siblings Ralston, Gordon, and Frances (named after her mother) had also done. She moved with her parents to Las Vegas for high school. She followed her father and brother Gordon to the University of Michigan, where she studied Speech Therapy, graduating in 1951. While at Michigan she met her future husband, Harold Orel, during the 1949 May Festival. Hal and Charlyn married in 1951 and were married for 65 years. They spent three years at the University of Maryland’s College Park campus. Charlyn worked in university libraries at Michigan and Maryland. She particularly enjoyed her year in Europe with Hal, as he taught in the University of Maryland’s Overseas Program in Germany, Austria, and England. They moved to Lawrence in 1957. She worked for the University of Kansas Library and the University Press; her husband taught in the English Department. They both loved Lawrence. Maternal duties took over in 1962 when her daughter Sara was born; son Tim followed in 1963. Charlyn devoted herself to her children and her community, serving as a representative of the PTA at Sunset Hill Elementary School, a Girl Scout troop leader, and as a member and officer of the University Women’s Club, the University Garden Club, a Needlework Club, book and bridge clubs, and a group that over the years read all of Charles Dickens’ novels aloud. She was an active member of the Unitarian Universalist congregation in Lawrence, and served as chair of that organization for a year. For more than 30 years she read literary texts, including short stories, for Audio Reader, a radio reading service for the visually impaired. Charlyn loved to travel. She visited all seven continents, and a high percentage of national parks and sites in both the U.S. and Canada. Her favorite city abroad was London. She established a tradition of baking Irish soda bread to commemorate St. Patrick’s Day for elementary school students. She did some fine needlepoint designs based on museum pieces in Egypt and France. Her openhearted personality won her a wide circle of friends. She will be missed. Survivors include her husband, Harold Orel; one daughter, Sara Elinor Orel, Kirksville, MO; son, Timothy Ralston Orel, Denver, CO; two cousins, Ted and Betty Hoskins, California; and nephews, Ward Hawkins, Los Alamos, NM, Craig Hawkins and Dennis Hawkins, both of Las Vegas, NV. Memorials may be made in her name to Unitarian Fellowship and/or Audio Reader at the University of Kansas and may be sent in care of the Warren-McElwain Mortuary, 120 W. 13th Street, Lawrence, KS 66044. Online condolences may be posted at warrenmcelwain.com. Please sign this guestbook at Obituaries.LJWorld.com.