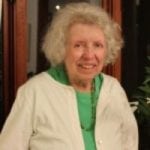 Mary Davidson died on May 26. She was 88. A memorial service is planned for early July in Lawrence.
She was born February 11, 1926 in St. Louis, the daughter of Sylvester Charles Rieser and Blanche Caroline Adams Rieser. She graduated from University City High School, attended Drury College, and graduated from Washington University in 1947. She earned a Master’s Degree from Washington University in 1949, and in 1981, a Ph.D from the University of Kansas.
In 1949, she married Jack Davidson who died in 2010. They met as graduate students at Washington University, working in the Student Committee for the Admission of Negroes (SCAN). They also worked with the Congress for Racial Equality, a non-violent group which opened many downtown lunch counters and the public swimming pools in St. Louis.
The couple lived and worked in Rio de Janeiro and Lillestrom, Norway from 1953 to 1957. Their first child, John, was born in Norway. Three more sons, Ken, Tom, and Jim were born in upstate New York. In 1966 the family moved to Lawrence, where she finished her graduate work in English Literature. She has published articles on Henry Green, Tom Stoppard, and Caryl Churchill and reviews of plays and books.
Mary was also very active in politics. She was a supporter and activist on equal rights for women; simple equality on racial, gender, sexual orientation and religious preference; public transportation in Lawrence; public education in Lawrence; open and accessible government; separation of church and state; and individual liberty. She served as president of the Douglas County chapter of the American Civil Liberties Union, on the board of the League of Women Voters, and was honored for her activism by the state legislature of Kansas. In 2000, she was a delegate to the Democratic Party Convention.
Her opposition to invasive spying by government and frequent violations of civil liberties earned her the Helen Fluker Open and Accessible Government Award in 2005. At the award ceremony her work at the ACLU and her involvement with the League of Women Voters, the National Organization for Women, and the Lawrence Coalition for Peace and Justice were highlighted. She continued to work on social justice and against war during all of her years.
Mary was preceded in death by her husband and her younger brother. She is survived by her cousin Kevin O’Morrison, 98, of Edmond, WA; her niece Anne Rieser of St. Louis; her nephew David Rieser of St. Louis; her brother’s wife Jerene Rieser of Frontenac, MO; by four sons, John Pirnie Davidson III and his wife, Shirley Schaeffer, Scarsdale, New York; Ken Davidson and his wife, Monica Davidson, Ottawa, KS; Tom Davidson and his wife, Diane Davidson, Lexington, MA; and Jim Davidson and his wife Mylisa Millerd, Lawrence, KS; by six grandchildren, Jessica, Julia, Anna, Nathan, Owen, Alice.
The family and her friends know better than to send flowers. Donations to charities may be made in her name in place of flowers. A suggested charity is Lawrence Visiting Nurses Hospice.
Online condolences may be sent at www.rumsey-yost.com.
Please sign this guestbook at Obituaries.LJWorld.com.