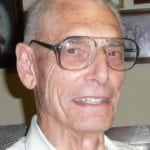 A Memorial Mass for Albert William Burgstahler, 85, Lawrence will be held 10:00 a.m. Friday, October 18, 2013 at St. John the Evangelist Catholic Church. He died Saturday, October 12, 2013 at his home.
Albert was born July 10, 1928 in Grand Rapids, MI the son of Albert Ernest and Constance (Foster) Burgstahler.
He received his BS in Chemistry in 1949 from the University of Notre Dame, his MA, cum laude in 1950 from Harvard University, and his PhD, cum laude in 1953 from Harvard University. He studied at the University of London and University of Wisconsin. In 2006 he received the Scientific Integrity Award for Fluoride Action Network which is awarded annually to scientists upholding the highest standards of scientific integrity in the effort to end fluoridation worldwide.
He was a member of St. John the Evangelist Catholic Church.
He began his life-long career at the University of Kansas in 1956 as an Associate Professor in Chemistry. He then became a full Professor of Chemistry in 1965. He became Professor Emeritus of Chemistry in 1998.
At the University of Kansas his teaching and research were devoted mainly to general and organic chemistry and the synthesis and chemistry of natural products. Other interests included toxic effects of environmental pollutants. His true passion was helping to eliminate fluoridation of public water all over the world. His interest in fluoride began in the early 1960’s and in a short time he became one of the world’s best known authors on the dangers of fluoridation. He was the editor and chief of the quarterly scientific journal Fluoride, published since 1968 by the International Society for Fluoride Research.
Albert enjoyed his studies on the Shakespeare Authorship question which began in 1997 and he presented international lectures and research papers on the subject.
He married Patricia Lois Bokor August 12, 1957. She preceded him in death April 17, 2010 after 53 years of marriage.
Survivors include three daughters, Maria Bokor, Tacoma, WA, Janet Anderson, Jennifer Burgstahler, both of Durango, CO; two sons, Albert, and wife, Marina Burgstahler, Annandale, VA, David, and wife, Leslie Burgstahler, New York, NY; ten grandchildren, Kimberly, and husband, Stewart Cooper, Lawrence, KS, Inga Burgstahler and Phillip Burgstahler, both of Annandale, VA, Tristram McDermott and Anna McDermott, both of Tacoma, WA, Nathaniel, and wife Cheryl Anderson of Houston, TX, Anthony Anderson of Durango, CO, David Burgstahler, Katherine Burgstahler and Elizabeth Burgstahler all of New York, NY; five great grandchildren, Marguerite, Patricia and Kenneth Cooper all of Lawrence, KS, Jackson and Jace Anderson, both of Houston, TX; one sister, Bobbie, and husband, Ray Landis, East Lansing, MI. He was also preceded in death by two sisters, Helen Boss in 2011, and Margaret Hiemstra.
Friends of Albert’s that are of notable mention; Bruce Spittle, lifelong friend and editor of the Fluoride Journal; Kok Thai, a former student of Albert’s and a great friend ever since; and everyone in the KU Chemistry Department.
A special thank you to Brenda Thompson, who was caregiver for both Albert & Patricia.
The family suggests memorials in his name to the International Society for Fluoride Research and may be sent in care of the mortuary.
Online condolences may be sent to www.warrenmcelwain.com.