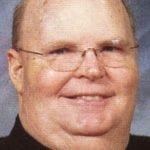 A Celebration of Life service for Gerald Max “Jerry” Vogel, 69, Lawrence, KS, will be held at 10:30 a.m. Monday, June 18, 2012, at Trinity Lutheran Church in Lawrence. Burial will follow at Memorial Park Cemetery in Lawrence, KS. Jerry died on Wednesday, June 13, 2012 at Lawrence Memorial Hospital.
Gerald was born on May 5, 1943 in Lawrence, KS, the son of John H. and Irene Schaake Vogel. His father, a state legislator, received the Lawrence Citizen of the Years Award. His mother loved being a homemaker. Jerry grew up in Grant Township on a farm that once belonged to the first governor of Kansas, Charles Robinson, now a Century Farm. The farm was also the home of the Dahlberg family in “The Day After.” His mother said he “loved everything about the farm and the great outdoors.” He exhibited livestock at the American Royal. His sister, Nancy, was a distinguished scholar and professor at Fort Hays State.
He managed the lifelong challenge of the effects of polio. He was assisted by a wheelchair since the age of nine. When he attended Central Junior High School, fellow students carried him up the stairs to classes. He was a graduate of Lawrence High School, and he attended the University of Kansas. At LHS, he lettered as a manager of the football team. He followed sports, especially the Kansas Jayhawks.
He worked as a computer lab instructor at Independence, Inc., and technology was his friend. Jerry made use of voice-assisted technology. Until recently he volunteered at Independence, Inc. where he had completed several business courses in computers.
He belonged to the Trinity Lutheran Church where he scheduled lectors. As a member of Lawrence Amateur Radio Club, his call letters were WAØOWH, and he enjoyed taking part in Field Days. Gene Burnett helped Jerry master the code part to pass his amateur radio license examination.
When KU students were housemates, he enjoyed a fraternity-like life. He liked playing cards, going to the theatre and musical performances, family gatherings, pies from homegrown cherries, class reunions, dancing at weddings, chocolate ice cream, and kind words. Full of patience, Jerry enjoyed listening and being a group member.
Survivors include his sister, Nancy Vogel, Lawrence; an aunt, Leona Vogel Tannahill, Lee’s Summit, MO; an aunt and uncle, Edwin and Ruth Vogel, Topeka, many cousins, a multitude of friends, a close network of caregivers. His first cousins are Janet Heck Kittlaus, Kelvin Heck, Virginia Vogel Wallace, Jim Vogel, Robert Vogel, Stanley Vogel, Karen Vogel Rankin, Pat Vogel Lertora, Peggy Hetrick, Doug Vogel, Alan Veeh, Carol Evans Dohm, Randy Evans, Larry Tannahill, Don Tannahill, Dale Tannahill, Steve Vogel, Jane Vogel McNeive, and Warren Vogel.
Jerry loved widely and remains an inspiration to many.
The family will greet friends on Sunday from 4 – 5:30 p.m. at Warren- McElwain Mortuary in Lawrence.
Memorials may be made in his name to the Charity of Donor’s Choice. Suggestions include: Trinity Lutheran Church or Douglas County Visiting Nurses, Rehabilitation and Hospice Care and may be sent in care of the mortuary.
Online condolences may be sent to www.warrenmcelwain.com.