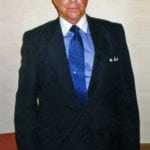 Funeral services for Bennie L. Stewart, 89, Lawrence, will be held at 10 a.m. Wednesday at the Church of Jesus Christ of Latter-day Saints Church, 3655 W. 10th St., in Lawrence. Military graveside services will be conducted following the services at Memorial Park Cemetery in Lawrence.
He died Friday, May 20, 2011, at his home.
He was born May 27, 1921, in Hutchinson, the son of Leroy and Hester Lyle Stewart.
Mr. Stewart was a World War II U.S. Army Air Corps veteran. He was a member of the 805 Bomb Group. He served in Europe and received the Distinguished Flying Cross for his service.
He received his bachelor’s degree in education from Kansas State University and later his master’s degree in education from Kansas State University in 1953.
He was a retired English teacher and driver’s education instructor in USD 497 in Lawrence. He started his teaching career in Ashland in 1950. In Lawrence he began at Central Junior High School and retired at Lawrence High School in 1983.
Mr. Stewart was a member of the Church of Jesus Christ of Latter-day Saints in Lawrence, Dorsey-Liberty Post No. 14 of the American Legion, the Douglas County Retired Teachers Association and he worked with the 55 Alive Driving Education Program for senior citizens. He was also a former Boy Scout Cubmaster and Scoutmaster and had received the Award of Merit from the BSA. He was also a 25-year volunteer for the Kansas Relays.
He was married to Ethel LaRosh on Sept. 4, 1949, in Hutchinson. She survives of the home.
Survivors include two daughters, Anne Johnson and husband Dave, Emmetsburg, Iowa, and Christine Thomson and husband James, Cedar Rapids, Iowa; two sons: David Stewart and wife Renae, Mesa, Ariz., and Harold Stewart and wife Darlene, Scottsbluff, Neb.; a sister, Leola Claussen and husband Jim, Topeka; 24 grandchildren; and 34 great-grandchildren.
He was preceded in death by his parents and a great-grandson.
The family will greet friends from 5:30 p.m. to 7 p.m. Tuesday at Warren-McElwain Mortuary.
The family suggests memorials to the Lawrence High School Endowment Association for a scholarship to be established in his name, sent in care of the mortuary, 120 W. 13th St., Lawrence, KS 66044.
Online condolences may be sent to www.warrenmcelwain.com.